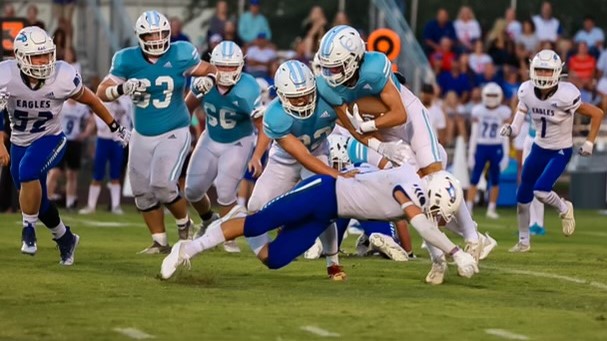 Football season is back! Our Warriors opened the 2022 football season with a decisive victory over the Eagles from Bryan Brazos Academy. While both offenses started slow with several early miscues, the Warriors were strong on defense from the first snap.  Senior quarterback, Max Landrum, began the scoring for CCS midway through the opening quarter on a 33-yard run. Meanwhile, the Eagles, facing a stiff Warrior defense, punted each possession of the half, with the exception of ending a drive with a Warrior interception by safety, Owen Witschonke. After another Landrum TD run, fullback, Warren Haudek, capped a 60-yard Warrior drive for the third score of the half and the Warriors went in 21-0 at the half.

The Warriors exploded on offense in the second half with 33 points with touchdowns being scored by Cooper Greiss, Adler Smith, Max Landrum and Kyle Prazak. Prazak, playing the slot position, had a good game in multiple areas, racking up 80 yards in punt returns in addition to the 37-yard TD reception from Landrum. The Warriors finished with 384 yards of total offense with the majority coming on the ground behind a good performance from the offensive line of Zeke Hogan, Christian Slabic, Jacob Rauch, Tucker Goodall and Andrew Owen.

Led by junior nose guard, Jacob Rauch, and senior linebacker, Preston Hamrick, the Warrior defense overwhelmed the Eagles offense the entire game. Rauch had a sack and two tackles for loss while Hamrick stood out, recording seven tackles, three for losses and recovering a fumble. Continuing a couple of trends from last season, the Warriors defense forced four turnovers and gave up almost nothing on the ground.

This Friday will be a much stiffer challenge as the Warriors travel to take on another defending state champion from 2021 in the Dragons from John Cooper High School. Coach Hogan believes this game will be a tough one for the Warriors. “John Cooper has a very good quarterback and a talented group of receivers. They do a great job attacking with their full-spread passing game. Every part of our pass defense better be prepared for a challenging night. Their Linebackers may be the strength of their team and they have enough guys returning from their state team last year to help shape a mindset that knows how to win. We will definitely have our hands full with Cooper. On the other hand, I’m very proud of the work our guys are putting in and I’m encouraged by the progress we’re making. We look forward to a competitive game Friday night,” says Hogan.

If you are unable to attend in person, you can watch varsity games live on Texas Sports Radio Network (TSRN) online and on any smart TV via the TSRN app available on Roku, Apple, Amazon and Droid. All games are free to view.