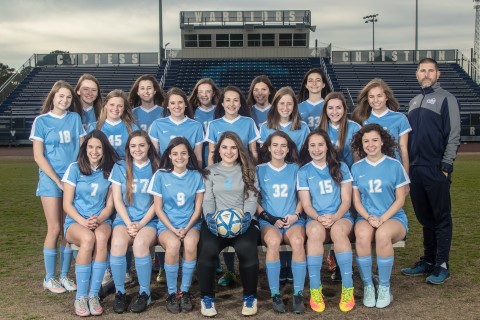 The Lady Warriors Soccer program lost nearly half of the 2016-17 starting line-up due to graduation which caused many of their league opponents to doubt their ability to compete for a play-off spot. Only the Lady Warriors knew that to doubt them would be a horrible mistake.  Cypress started the season slowly with a tough loss to a top ranked St. Thomas Episcopal, but finished their league play with six straight wins and only allowing five more goals for the remainder of district play.

The team finished in second place in the TAPPS Division III District 4 competition and earned a first round home play-off game against Veritas Academy of Austin. This game was played this past Tuesday and was a battle of two very evenly matched teams. Aubri Garrett scored a quick counter attacking goal from an assist by Rachel Smith to give the Lady Warriors an early 1-0 lead. After eighty minutes of hard work and some strong defensive work, CCS was victorious and advances into the next round of the TAPPS play-offs.

The Lady Warriors travel to Seguin on Friday for a match-up against Our Lady of the Hills from Kerrville. The game will be played at Texas Lutheran University at 6:30pm.