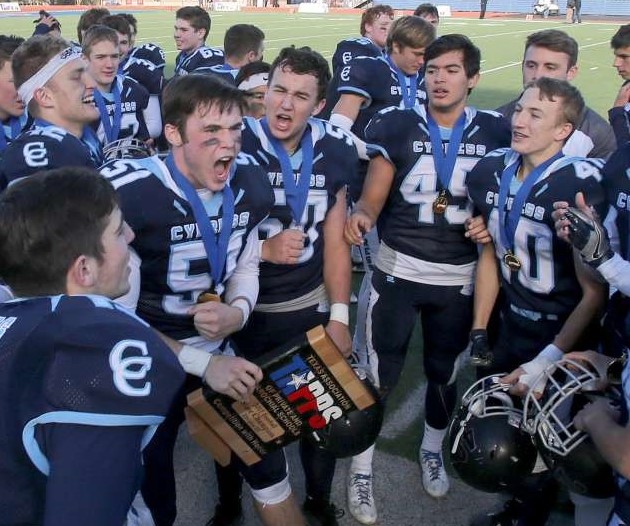 The Warriors took home the TAPPS Division III State Championship on Friday afternoon with a record setting 68 to 34 victory over McKinney Christian. It certainly had the feel of a shootout, but the Warrior defense forced five turnovers including a pick six on a screen play by Drue Hirth, the defensive end. John Ethan Baldwin recorded 16 tackles and two interceptions to lead the defense. Paul Carpenter and Landon Paulsen recorded sacks as the defense came up with big plays all afternoon.

Josh Holl made big play after big play in route to a new passing record for yards and TDs in a game with 6 TDs and 396 yards. The Warriors also broke the school record for total offense at 595 yards.

McKinney simply did not have answers for all the offensive weapons. On the opening drive, the Warriors overcame a penalty and a 3rd and ten when Holl hit JT Mounce for 53 yards. His first TD pass of the game would come just two plays later when he connected with Joseph Carbone. McKinney scored on the next drive to tie things at seven. It only took the Warriors one play as Holl hit Mounce again for 75 yards.

Nathan Frye came up big on the next series as he forced a fumble that Austin Henry would recover. Six plays later, Christian Fleischhauer would find the end zone for the first of his two touchdowns.

Hirth would intercept the screen pass for the defensive score and then Fleischhauer would find the end zone again. Ian Jones connected on the first of his two field goals to give the Warriors a 30 point 2nd quarter lead. McKinney continued to battle, but never got closer than 16 as Holl continued to find open recievers for big plays. Mounce would catch another touchdown pass while Reid Chapman would add two of his own.

On special teams, the Warriors continued to produce game-changing plays and Ian Jones split the uprights on two field goals, the first from 36 and the second from 29 yards.

Coach Spenn had this to say, "When Josh put his first couple of throws on the money and the line was giving him plenty of time, I knew we would do a lot of scoring. Our defense also came up big with turnovers and key plays just like they have done all year. It was a special day and to end on a victory for these seniors means a lot. While it is the end of a journey, we have talked about this opportunity being a platform to share Christ the rest of their lives. Our goal as a program is far greater than winning games. It is to be transformational in the lives of the players and to build men that will impact their world for Christ. Winning is a by-product of true success, but it is a very sweet one. Go Warriors!"