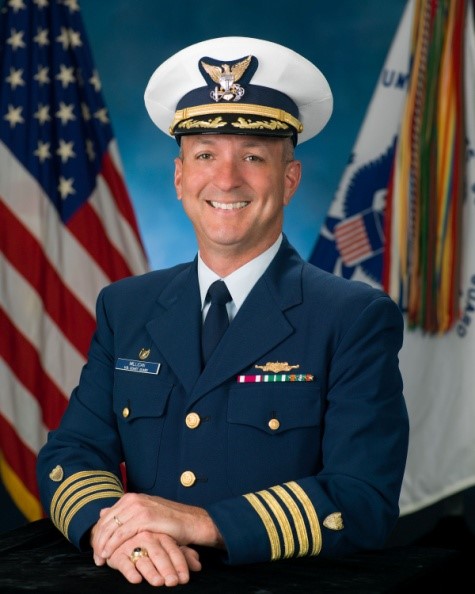 CAPT Brett Millican graduated from the U.S. Coast Guard Academy with a B.S. in management in 1992. His first tour was as Deck Watch Officer and Supply Department Head aboard CGC VIGILANT in Port Canaveral, Florida.  He then served as Executive Officer aboard CGC NUNIVAK at Naval Station Roosevelt Roads, Puerto Rico. After selection to the Financial Management Postgraduate Program, he attended George Mason University in Fairfax, Virginia, where he earned an MBA. Upon graduating in 1998, he served as a Contract Specialist and Budget Analyst in the Major Systems Acquisition Contract Support (G-ACS) and Commandant’s Budget Offices (G-CBU) at Coast Guard Headquarters in Washington, D.C. From there he served as Executive Officer aboard CGC SUNDEW in Duluth, Minnesota from 2001-2003, Chief of Training and Readiness at Pacific Area Operations Headquarters from 2003-2007, and Operations Officer aboard CGC BOUTWELL in Alameda, California.

As a newly minted Commander, he served as the Comptroller at Integrated Support Command Portsmouth, Virginia, beginning in July 2008. He added the duties of the Executive Officer and completed the unit’s transition to a Base Support Unit on September 28, 2009. He earned the Certified Government Financial Manager certification and served as the Finance Section Chief at the Deepwater Horizon Oil Spill Unified Area Command in 2010. In August 2011, he earned the Certified Defense Financial Manager with Acquisition Specialty certification from the American Society of Military Comptrollers. In November 2011, he became the Executive Officer of the newly reorganized Base Portsmouth. Returning to his home state of Texas after 25 years, he served as the Commanding Officer of Coast Guard Sector Field Office Galveston, Texas, from 2013-2015. Promoted to the rank of Captain, he served as the Commanding Officer of Base Boston from 2015-2018, then spent his final two years on active duty as the leader of the service’s Financial Management and Procurement Services Business Process Reengineering Team in Norfolk, Virginia. He retired in 2020 and returned to his home state of Texas.

His military awards include three Meritorious Service Medals, two CG Commendation Medals, five CG Achievement Medals and the Armed Forces Expeditionary Medal. He and his wife Leslie are both native Texans and the proud parents of Emily, Garrett, Benjamin and William.