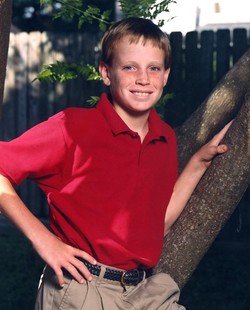 “CCS lost a valiant sixth grade Warrior on July 6, 2003, when Brandon Vick went to be with the Lord at the early age of 12, but the Lord gained a precious new addition to heaven. Students and friends attended his ‘graduation service’ and released balloons in his memory at the conclusion of the July service.

“On August 20, 2003, CCS middle school students held a special chapel service as a tribute to Brandon’s life. ‘It’s at times like these that our school family holds each other up in love and support,’ said Head Administrator, Dr. Glenn Holzman, ‘as we become God’s healing touch for one another.’ ”

A Special Note from Brandon’s parents – Dale and Celeste Vick

“Brandon’s education at Cypress Christian School began in 1998. Brandon loved the Lord, loved his family, loved his school, and loved his friends. Whatever Brandon did, he did with all his heart, as was the case with the Run-4-Fun, year after year.

“At the end of his sixth grade year, Brandon came home with a heavy heart and asked our family to pray for his friend who might not be able to attend school the following year due to financial reasons. Brandon was a very compassionate person. In keeping with his prayer, a fund was initially set up to assist with tuition needs in these situations.

“Cypress Christian School was kind enough to keep Brandon’s memory alive and also keep his prayers answered by allowing this fund to continue. The Run-4-Fun event was named after Brandon and each year 10% of the proceeds of the elementary fundraiser are directed toward tuition assistance. Brandon's two brothers are graduates of CCS - Hunter ('14) and Travis ('15), and I know this is very important to them, also. This school has been such a blessing to our family in so many ways, and I am so grateful to the Lord for bringing our family to Cypress Christian. One year the motto for Run-4-Fun was perfect, ‘Run for the Prize.’ That’s exactly what Brandon did!”

Hebrews 12:1 - “Therefore, since we are surrounded by such a great cloud of witnesses, let us throw off everything that hinders and the sin that so easily entangles, and let us run with perseverance the race marked out for us.”

“A friend’s a friend forever if the Lord’s the Lord of them. Though it’s hard to let you go….in the Father’s hand we know…that a lifetime’s not too long to live as friends…”

John 3:16: “For God so loved the world, that he gave His only begotten Son, that whosoever believeth in Him, should not perish, but have everlasting life.”