Wild Finish Sends the Warriors to the Title Game 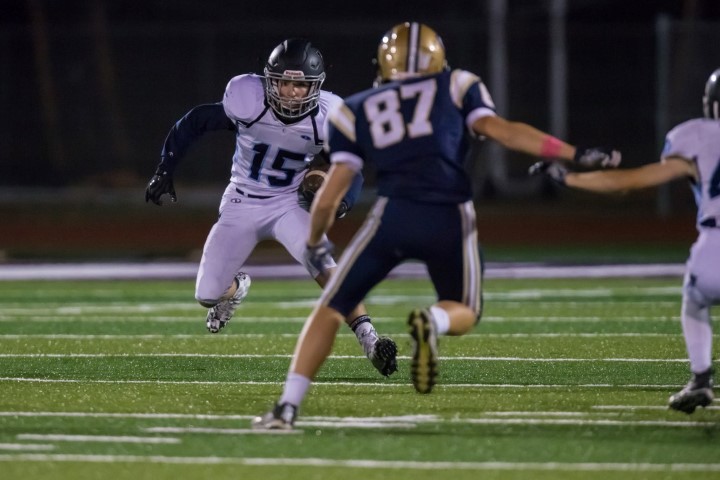 You could not have asked for a better high school football game. Two great teams battled hard to the very end in a game that was back and forth all night long. The teams combined for 92 points and nearly 900 yards of offense.The game featured ten lead changes.

The Warriors eventually gave themselves some breathing room after scoring on the first drive of the half. Senior Braden Barbisch had two big catches for 65 yards before Josh Holl found Reid Chapman for the score that would put the Warriors ahead to stay. Geneva drove the ball the length of the field, but Nevin Graves came up with his first of two interceptions on the night on the two yard line. Throwing from his own end zone, Josh Holl went to work and found his favorite target, Joseph Carbone down the sideline for 77 yards. Four plays later, the Warriors would face a 4th down and 12, but Holl found Carbone again for the first down and eventually the end zone.

Carbone had three touchdown catches on the night. Josh Holl had five touchdown passes. Normally 49 points puts you in a position for an easy win, but Geneva kept battling all night long. They refused to quit, while playing with great class. Two fourth quarter Geneva drives would be turned away by interceptions with Graves and Fleischhauer both getting their second of the night.

Geneva did find the end zone with 2:32 left to play to cut the lead to six and then forced a turnover, the third of the night. The Warrior defense had already played over 90 plays (nearly two games worth), but they answered the call. Coach Spenn said, "We talk all year long about the idea that you can do one more. In that final time out before the 4th down play, I could see a lot of tired players, but as I asked them for one more play, I also knew they had it in them. This is what you practice for. As a competitor this is what you want, the game on the line."

The game down to a 4th and five on the 11 yard line, Lawson Ellisor and Paul Carpenter delivered hits on the quarterback as he delivered the ball to his top target, the tight end across the middle. The Warriors could not ask for a better situation as John Ethan Baldwin was locked in man coverage and in great position, but the ball never got there as Austin Henry was left without a man and reacted to the quarterback and deflected the ball away.

Coach Spenn said, "It was a great game with two great teams. It is what playoff football is all about, but it is a shame that someone had to lose the game. I could not be more proud of our team and the effort they have put in all season. Next week will be a lot of fun when we get to play for it all.

The Warriors will play McKinney Christian for the TAPPS Division III State Title at Midway ISD Panther Stadium on Friday, December 7 at noon.