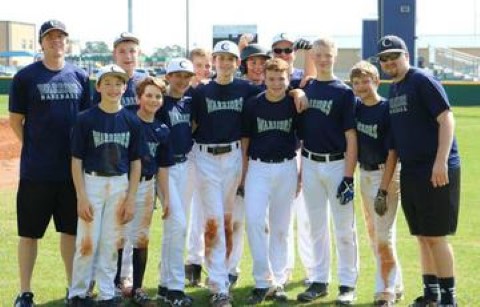 The middle school B baseball team beat the Premier Futures team with a score of 10-8. The game was tied at eight with the Warriors battling in the bottom of the fourth when Grayson Beckman homered off of Grant, driving in two runs.

The Warriors were strong at the plate and scored six runs in the second inning thanks to a walk by Andrew Williams, a walk by Walker Girad, a single by Cody Andrus and a single by Zach Thibodeaux.

Thibodeaux and Beckman each collected multiple hits for the Warriors. Beckman, Thibodeaux and Andrus each drove in two runs. The Warriors stole seven bases during the game as two players stole more than one. Alex Andrus led the way with two.

View shots of B team in action via the photo gallery in this article. Way to play, Warriors!