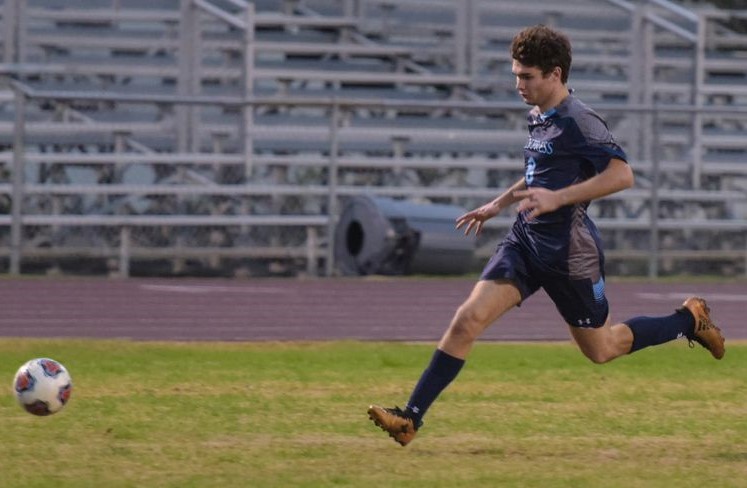 The Warrior varsity boys soccer team opened district tournament play on Thursday evening at Warrior Stadium against Frassati Catholic.  It was a quarterfinal match, with the winner moving on to the tournament semi-finals on Monday. The air was brisk with a cold light wind from the north and the field was wet and slick from Wednesday's rains, but the conditions would not stop the Warriors from a strong performance.

The opening 20 minutes were spent in the attack zone with several opportunities producing good chances to score. However; the match remained 0-0 until the final 12 minutes of the first half. As it has all year long, Christian Andrus' hustle and raw speed would pay off BIG TIME on this evening. At the 28-minute mark, Christian outraced the Frassati keeper to a bouncing ball, followed his own deflected shot and buried the rebound for a goal and 1-0 Warrior advantage.

John Macune would have a strong game with several key saves in the closing minutes of the first half of action. At the 36-minute mark, a streaking Frassati Falcon thought he would slip the ball past Macune for the equalizer; however, Macune was quick to drop and deflect the shot back, and ultimately shut down the Falcon attack.

At halftime, the Warriors held a 1-0 lead, but the game was very much still up in the air.

The second half; however, would belong to the Warriors. Again, Andrus' speed, hustle, grit and determination would play a key role in three more Warrior goals. Andrus would again sneak past the Frassati defense eight minutes into the second half and deflect a pass just by the outstretched arm of the Falcon goalkeeper.

Then, at the midway point of the final half of play, a nice passing combination from Josh Storey, to Cole Greenberg, to Connor Newell, to Christian Andrus would create a breaking opportunity for Andrus. This time his shot was deflected but his quick reflexes got him back in the action to bury the loose ball.

Finally, with just 25 minutes left on the clock, a pass towards the front line was wildly deflected, again by Andrus, and the ball spun high, then bounced just inside the goal post for the fourth Warriors goal. CCS led 4-0 and would hold this lead to the final whistle.

The boys move on to the District Tournament Semi-Finals on Monday, January 27, in a rematch with Lutheran South Academy. The game will be played at LSA in south Houston.

The victory over Frassati guaranteed the Warriors a spot in the TAPPS State Soccer Tournament, beginning February 5. Look for more info and match details coming soon!