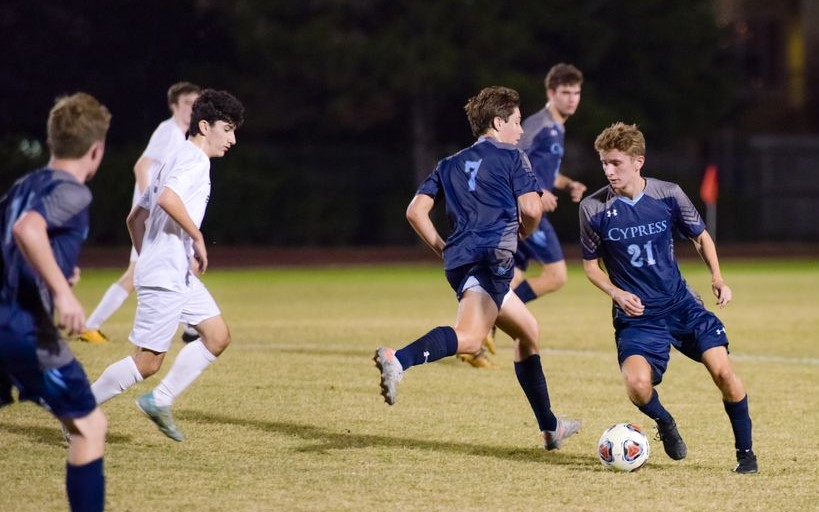 The Warrior varsity boys soccer team defeated Frassati Catholic by a final score of 4-2 on Tuesday evening on the wet, thick grass at Frassati Field in Spring, TX.

The Warriors controlled the ball, and the game, from the very start of the evening. Although the wet conditions caused some loose footing throughout, the Warriors struck early with Josh Storey scoring just three minutes into the action. After dribbling to the end line, Josh made a nice cutback move to get the ball on his potent left foot for a blast into the back of the net.

At the 15 minute mark in the first half, Christian Andrus got a nice feed from Cole Greenberg to set up his shot to the far post. Christian's goal made the score, 2-0 Warriors! Just three minutes later, Cole found himself alone running past the Frassati defenders for a breakaway opportunity. The sure-footed Greenberg buried the shot for a 3-0 lead.

Frassati would fight back, however; and mustered a goal at the 25-minute mark to draw within two goals, at 3-1.

It would turn out to be the Warriors night as Greenberg scored yet again to put the Warriors up comfortably 4-1 at halftime.

The game slowed in the second half, with just a single opportunity and goal for Frassati. The Warriors defense would hold strong in the closing minutes to secure the 4-2 victory.

The Warriors host Lutheran South on Thursday, January at Warrior Stadium to wrap up the regular season. The team is ready for the District Tournament, which will determine seeding for the State Tourney in February!