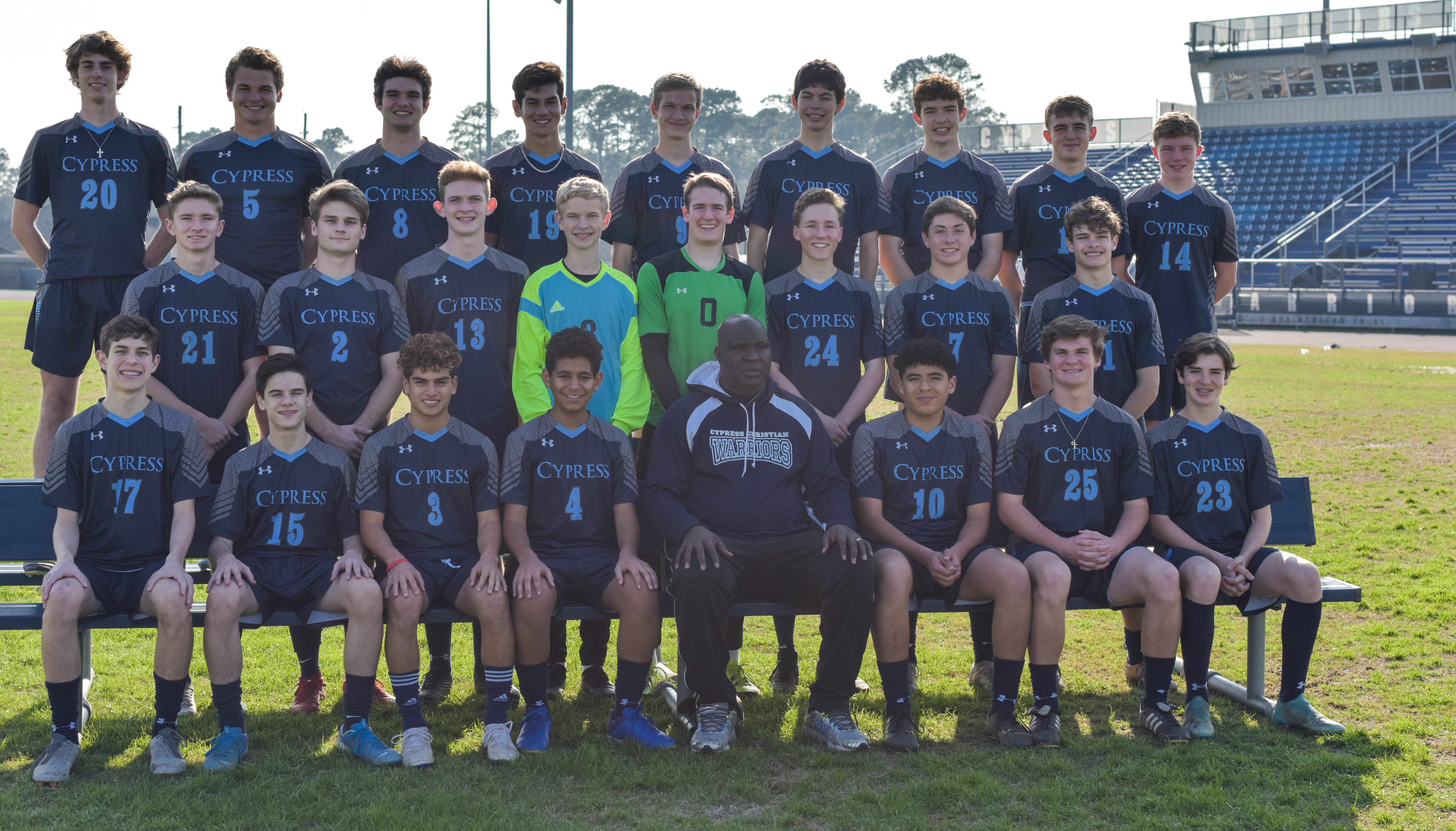 The varsity boys Warrior soccer team faced off against St. Joseph's Academy in Brownsville on February 5 in the TAPPS Division II State Soccer Tournament. After the long bus ride to south Texas, the boys were greeted with brisk 48-degree temperatures and a howling crosswind most of the afternoon.

The home Bloodhounds of St. Joseph were ready to face our Warriors. The match played very even through 10 minutes, with both teams trying to find openings in the opposing defenses. The Bloodhounds found a gap in the Warrior defense 12 minutes in and the shot struck the crossbar and bounced harmlessly away. The next few minutes belonged to CCS. Both Josh Storey and Cole Greenberg created nice opportunities and got shots towards the St. Joseph net. However, neither shot would connect.

Off a corner kick by Colin Burns, Connor Newell got a header off, but the ball was placed just inches over the top of the crossbar. The Warriors began to control more of the game flow and disrupt the Bloodhound attack. Towards the end of the first half, things would change, however. Another Bloodhound shot grazed the side of the goal post and went just wide.

With just moments left in the first half of action, with the match even at 0-0, St. Joseph took the ball into the far corner and hit a knuckling shot towards the net. The wind grabbed and moved the ball furiously as it approached the goal. The movement was just enough to cause a deflection into the net. After a furious rally and pressure by CCS, the first half would end 0-1, in favor of St. Joseph.

The second half of action would be one for the history books. Truly, 40 minutes of soccer ups-and-downs, highs-and-lows, cheering-and-crying in Brownsville, TX! Just two minutes into the final half of action, Storey took a pass from Greenberg and "laced" a shot from 25 yards out. This wind-aided knuckler would find the top shelf corner to tie the match at 1-1. It was a beautiful strike by Storey!

The match suddenly had plenty of emotion! The 200+ Bloodhound fans would make themselves heard, as the 12 CCS faithful would do their best to cheer on the Warriors! The game was physical, with several hard hits. Three Bloodhound players would receive yellow "caution" cards for rough play in the second half. After some nice "give-and-go" passing between Greenberg and Storey, Greenberg hit a nice shot that many thought would find the back of the net. The ball sailed and the St. Joseph keeper was able to get one finger on the ball and deflect it wide.

With 20 minutes left in the match, things would really get interesting. St. Joseph's star striker carried the ball deep into the Warrior defense and unloaded an unstoppable shot. St. Joseph led 2-1 with 18 minutes left. Down a goal, the Warriors turned up the attacking pressure. Several shots were stopped until the 14-minute mark when Christian Andrus would get a header in the Bloodhound zone and connect for a Warrior goal. The game was tied 2-2 and the crowd was in a frenzy.

Moments later, after returning from the bench for medical attention, Jackson Landrum would send a long shot into the St. Joseph goal box. The ball was deflected by the St. Joseph keeper and Alex Andrus pounced on the opportunity to shoot the ball into the net. For just a moment, the Warriors had grabbed the lead! However, the referee had other ideas. The official called a foul on the Warriors for "goalie interference", a seldom-used rule in soccer, particularly when the ball is free and loose in the box. The goal was taken off the board, and the score remained tied at 2-2.

Late in the action, with both teams scrambling to take the edge, the Bloodhounds were able to jump on a scramble in the CCS zone and knock in the go-ahead score. St. Joseph Academy would go on to close the game and knock the Warriors out of the State playoffs, 3-2.

It was a hard-fought, super-exciting, gut-wrenching match. Your Warrior boys put forth maximum effort in what were very difficult circumstances, on the road, seven hours from home.

CONGRATULATIONS to the Warrior boys for a successful soccer season!