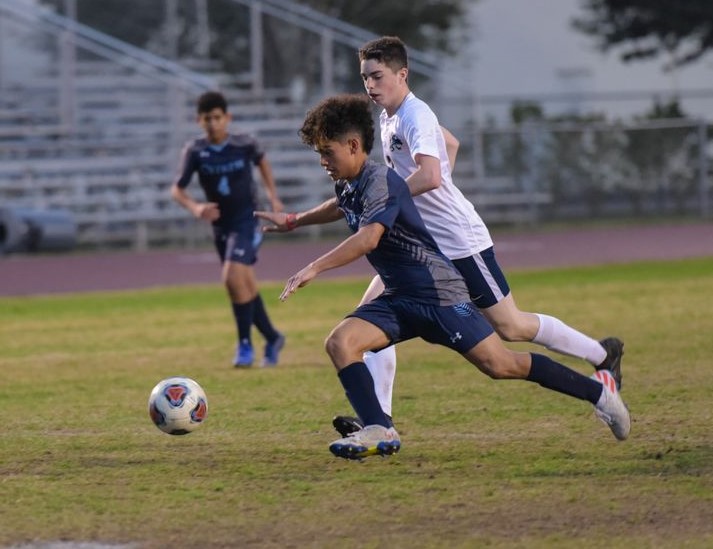 The boys varsity soccer team faced off against Westbury Christian on Friday, January 10. In the wind and sporadic rain, the first 10 minutes were played in the Warriors defensive zone, but our defense held strong. Soon, the Warriors gained control of the game and possession of the ball as they pressed forward. In the 19th minute, CCS broke the ice with a nice deflection goal by Christian Andrus, on a cross from Connor Newell. Then, in the 30th minute, Cole Greenberg got loose for a breakaway and slotted his shot over the Westbury goalie's shoulder for a 2-0 Warrior lead.

Soon thereafter, Michael Slabic got on the board with a nice breakaway goal, after beating the Westbury defensive trap. The first half ended 4-0 when Christian Andrus used his speed to outrace the Westbury defense and goalie for another Warrior score.

Your CCS Warriors played with increased confidence in the second half and added four more goals, for a final of 8-0! Michael Slabic ended the game with a team-high four goals (two coming in the closing minutes of action), and Miguel Morales chipped in with a nice goal in the 60th minute, the first of the second half scoring barrage!

Next up for the Warriors is a date at Frassati Catholic on Tuesday, January 14. Then, Senior Night for the varsity soccer teams is Thursday, January 16 at Warrior Stadium. The girls play at 5 pm and the Boys at 7 pm. Come out and cheer on your Warrior soccer teams!