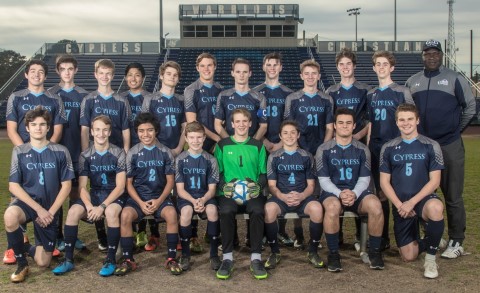 The CCS Warriors Soccer program wrapped up a successful season of league play this past Thursday.  The boys program finished in second place in the TAPPS Division III District 5 which allowed them to play their first play-off game at home. With a 10-2 regular season record and having allowed only five goals to be scored against them, the boys entered the post season with momentum.

In the first round of the play-offs the Warriors matched up with Beaumont Legacy Christian and after completely controlling all aspects the game, the Warriors earned a 3-1 victory. For the second round of the TAPPS play-offs, the Warriors matched up with a physical St. John Paul II team out of the New Braunfels area. The Warriors scored early to take a 1-0 lead; however, a series of injuries began to take their toll and John Paul II pulled away for a 4-2 victory. Congratulations to our boys soccer team for a great year and thank you to our senior captains Jacob Harper, Tyler Landua and Matthew Mudrow for their leadership.