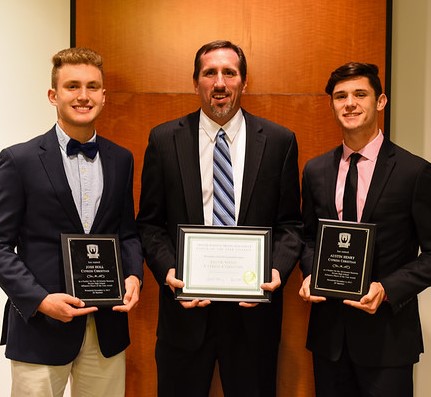 At the end of every football season, the Touchdown Club of Houston honors the best in private school football with a special awards dinner. At this dinner they name an offensive, defensive, lineman and iron man of the year along with a coach of the year award. The players are selected by a panel of coaches that includes all levels of TAPPS football and the SPC coaches that review game film from the entire season.

Josh Holl was named as a finalist for offensive player of the year. When the senior captain has been the starting QB, the Warriors have a record of 21-3 and have compiled over 8,600 yards. Josh has thrown for 4,000 yards and 52 touchdowns. He holds school records for passing yards in a game (371 yards), touchdown passes in a game (7), and career touchdown passes (52 and counting).

Austin Henry was named as a finalist for defensive player of the year. Austin is a three-year starter for the Warriors and also a senior captain. He will graduate as the all-time leader in sacks. He currently has 13 on the season. His 89 tackles include an additional 17.5 tackles for loss, and for his career, he has 209 total tackles.

Coach Spenn is being honored as a coach of the year finalist for the second straight season. The Warriors record is currently 11-1 and they have advanced to the TAPPS state semi-finals for only the second time in school history. This is Coach Spenn's tenth season as the head coach, and he has a career record of 70-42 with four district titles and eight playoff appearances. As a Division III football team the Warriors have never finished worse than second place in the district and made the playoffs in all eight years.
Coach Spenn had this to say about the honors, "These two young men have put in a tremendous amount of effort and it is great to see them rewarded. They are great examples of CCS and our football program and it has been an honor to coach them. The coach of the year honor speaks highly of my great coaching staff and the work that they have put in. In reality, all three of these honors are team awards. Without great teammates and team success on the field, individual awards are hard to come by."
The dinner which is presented by the Hildebrand Foundation and Houston Methodist Orthopedics & Sports Medicine, will be held at
7 p.m., Monday, December 4 at the JW Marriott in the Galleria. Tickets are available through the Touchdown Club website.