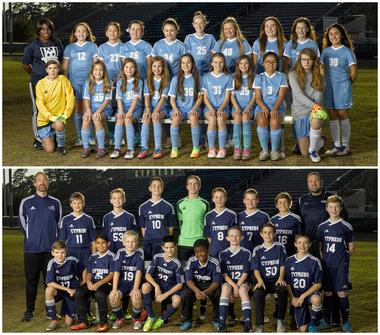 The CCS Warrior Middle School Soccer program concluded an exciting season this past Saturday with both our boys and girls teams playing for the District Championship.

The Lady Warriors began the double header with a match-up against Northland Christian. It was a close battle with the Warriors controlling possession but consistently finding themselves unable to find the back of the net. Finally, Avery Utley broke free from the Northland defenders and placed a perfect shot into the back corner of the goal to put the Warriors ahead 1-0.  In soccer, defending a one goal lead is difficult, but our Warriors held on and claimed the first place trophy giving them the title as back-to-back District Champions!

The boys match began with the CCS Warriors facing The Woodlands Christian Academy where they quickly found themselves down 0–1 after a Woodlands Christian forward scored on a breakaway just a few minutes into the match. The Warriors fought back and equalized the score just before halftime with a brilliantly placed free kick by Sam Sager. The second half was a defensive battle for CCS as the boys found themselves pinned to their own end of the field for most of the half. With time winding down, CCS conceded the go ahead goal to Woodlands Christian and finished the season in 2nd Place.

It was a great year for both programs with many victories and a handful of defeats. Even more importantly, the Warriors glorified God with their play, improved as soccer players and had an amazing amount of fun!

Congratulations to our middle school soccer athletes on their great season.