The middle school girls basketball season ended last weekend with both the A & B teams competing in the HAPS District Tournament held at Rosehill Christian where both teams took home the first-place hardware as district champions!

The A team entered the tournament as the number one seed with an undefeated district record. In the first game, the Lady Warriors faced The Woodlands Christian Academy and jumped out to an early 13-0 lead. The lead was extended and CCS won the first-round game 39-5. It was a great team effort that contributed to the win - Sarah Olenick led the offense with 10 points, followed by Aleah Dziubarczyk with seven, Nicole Santos with six, while Nya Graves, Sophia Wanic and Chloe Lehman each had four points and Emersyn Smith and Caroline Tate added two points each. Tate led the team with five rebounds and Jacey Bonin had 10 steals. In the second round, CCS took on Faith West and the Warriors defensive pressure led to fast break opportunities in the early minutes of the game and a 19-5 first-quarter lead. CCS pulled out of the full-court press and was able to play solid half-court defense and run their offense effectively the remainder of the game leading to a 39-11 victory in round two. Olenick and Santos each had 10 points to lead the offense while Wanic had nine rebounds and Graves had eight steals.

In the championship game, the Lady Warriors faced their district rival Rosehill, a team that is well-coached and always plays hard. This was a rematch of last year’s championship game, so there was a buzz in the crowd for the opening jump ball. Rosehill jumped out to an early 4-0 lead as the Warriors struggled to get open shots against the solid Eagle defense. The first quarter remained a defensive battle until Graves hit a baseline jump shot with a couple minutes left to get the Warriors on the scoreboard. Graves then scored two more times giving the Warriors a 6-4 lead as the first quarter ended. Strong defense remained the theme in the second quarter but CCS was able to take a 15-10 halftime lead. In the third quarter, the Lady Warriors were able to open things up a bit with Graves and Olenick each scoring six points, including a three-pointer by Olenick, which extended the lead to 11 points. Rosehill continued to battle, but the Warriors met each challenge. The game ended with a 38-20 CCS victory as the Lady Warriors hosted the first-place trophy and became back-to-back district champions! Graves finished with a game-high 14 points, following by Olenick who had 12 points. Smith and Dziubarczyk each had four points while Santos and Bonin added two points each. Santos and Wanic each grabbed seven rebounds and Dziubarczyk had six rebounds. Defensively, Graves led the team with 11 steals, Olenick and Santos each had four steals, while Wanic and Erica Davenport both had three steals each in the game.

The B team entered the tournament as the number one seed in their division as well with a 9-1 district record. The B team played a record 17 games this season, losing only three, one being to Legacy Prep and two to homeschool teams.

By entering as the number one seed, the B team was granted a bye in the first round of the tournament. In their first game against The Woodlands United Methodist School, the lead was established early on, and the team went on to win 27-12. In the championship game, the CCS Lady Warriors faced the TWCA Lady Warriors. The team was ready to play, but as the clock started and the shots went up, the ball just couldn’t find its way to the bucket. As this team had been accustomed to scoring within seconds of the game beginning, their solidarity was shaken until Audrey Fransen scored six points in three steals with less than two minutes left in the first quarter to seal the lead. The CCS Lady Warriors never looked back and took the championship with a score of 26-15 over the TWCA Lady Warriors.

The resolve of the B team grew with every game as each player contributed RELENTLESSLY to the team. Ana Clements, Audrey Fransen and Sophie Fransen led the team offensively and defensively for the season from the high-post and low-post positions.  Kacey Trieu and Audrey Petrowski led the team as guards and playmakers on the court. Violet Clement and Paige Petru ran the baseline hard as rovers and key side shooters. Rachel Austin, as a versatile player, contributed from almost every position on the court as she was able to see an open position and jump in where needed. Avery Connelly and Katie Schmitt played key roles as they led under the basket at post and rover positions. The B team fought hard all season to improve each game and daily in practice.

The middle school C Team, comprised of Hope Hotchkiss (grade 7), Emily Leamons (grade 7), Alana Nevills (grade 7), Kayla Geyer (grade 6), Tatum Webb (grade 6),  Emery Bonin (grade 5), Jolie DeLongchamp (grade 5) and Katie Hirth (grade 5), had a great season. This year the C team participated in a private school double-header league on Saturdays located at various schools and churches in the Woodlands. This team of girls were hard workers, eager to please and had the desire to develop in the game of basketball. We are positive that each of them has great futures in basketball. Keep up the great work girls!

The theme this season was RELENTLESS, and the MS Lady Warriors were relentless as they prepared each week and gave their best effort towards the district titles! 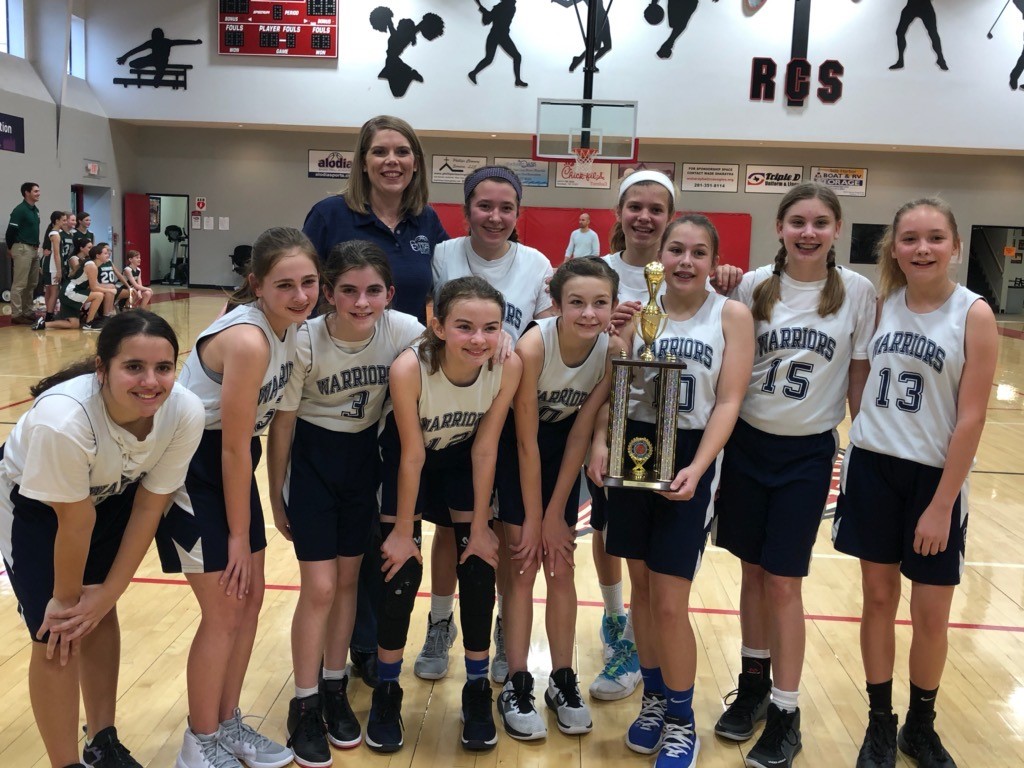