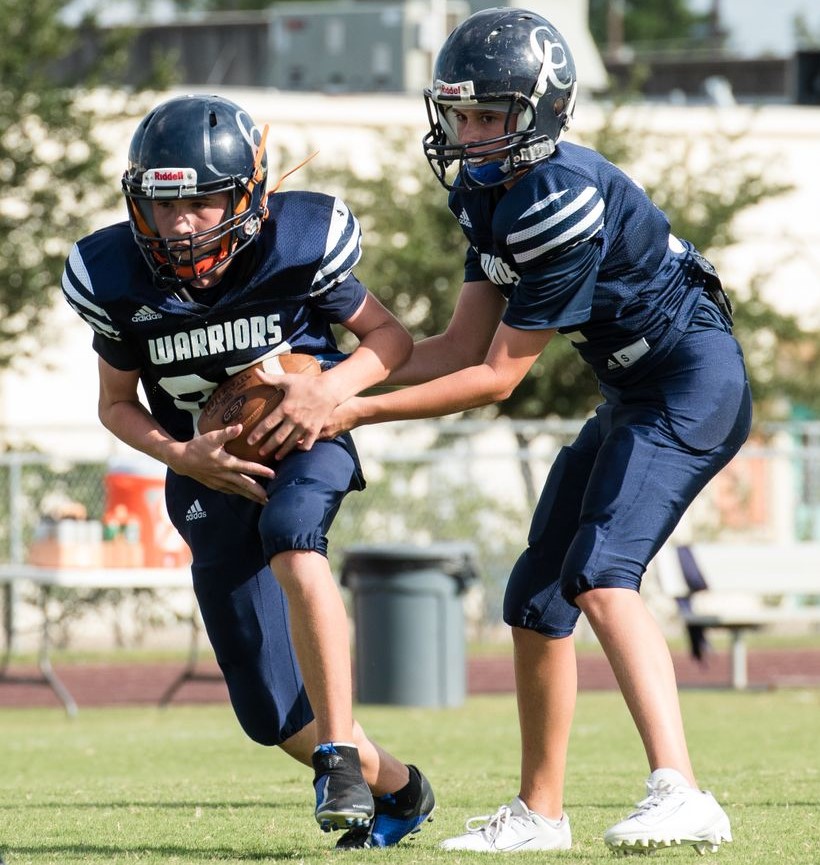 The middle school football teams entered the fourth week of the season with two home games. The B team had a tough game against Trinity Klein Lutheran on Tuesday. The Warriors played hard on a rain-soaked field but were not able to come up with an answer for a talented Trinity offense. However, after being held scoreless for most of the game, the team never quit and drove the ball down the field late in the fourth quarter and finished strong with a touchdown pass from Grayson Petru to James Reeves on the final play of the game. It was a loss for the Warriors, but the team will take away many positives from the effort shown in the final quarter.

The A team faced St. Cecilia on a Saturday morning contest and the Warriors continued to control the top spot in district play with a 30-0 win. The Warriors took the opening kickoff and marched down the field capping off the drive with a 15-yard strike from quarterback JD Potts to Owen Witschonke. A couple of possessions later, Wade Butler took the hand-off on a reverse and weaved his way through several defenders, turning the corner as he raced down the sideline into the endzone, putting the Warriors up by two touchdowns. Then it was the Warrior’s defense's turn. At linebacker, Potts shut down one St. Cecilia drive with an interception and then shortly after, corner Brandon Stovall intercepted another pass taking it 35-yards diving for the pylon as he was forced out of bounds at the 1-yard line. That set up a quarterback sneak for another Warrior touchdown. The scoring was capped off in the fourth quarter when Warren Haudek took a handoff and made several shifty moves on his way to the game’s final score. The offensive and defensive lines continue to control the line of scrimmage which makes everything else possible, led by another dominating performance by Jacob Rauch on both sides of the ball.

At the halfway mark of the season, the B team has a record of 2 wins and 2 losses and the A team is unbeaten at 4-0.