MS Football B Team Finishes with Best Record in Years 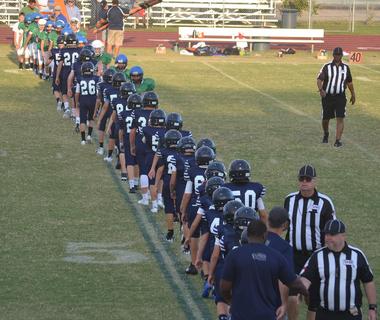 In a year in which the high school varsity and middle school A football games are usually blowouts, the middle school B football team offered exciting contests every week. All but one of the events were decided by less than a touchdown. While they finished with a 3-3 record, the best record for B team in years, it could have easily been 6-0 if the ball had just bounced their way a couple more times. Three of the games were decided in the final minute of the game. The 2017 season is certainly one to be remembered and celebrated!

The team showed much resiliency and heart throughout the year. These boys matured and improved not just in the sport of football but as men. They took responsibility and stepped up during tough moments, letting situations neither affect how hard they were going to work, nor distract them from their goals. They took 1 Corinthians 10:31 and applied it to football, giving God the glory in whatever they do. We are proud of these young Warriors who never gave up and competed with the goal of honoring God!