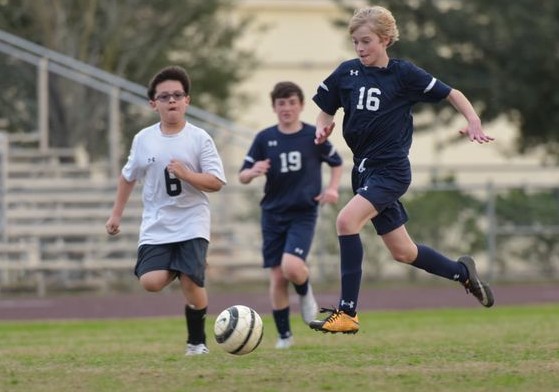 The middle school Warrior boys soccer team had a fantastic return from the recent Christmas holiday break. They started with a game on the first day back to school, playing against an untested Lutheran South team. Zachary Burns found the net at the four-minute mark off of an assist by Kyle Leamons to take an early lead. The Warriors held a 1-0 lead until Leamons buried one at the 43-minute mark off an assist by Brayden Stovall. The team held their 2-0 lead to win the game.

Their second match of the week was against Northland Christian two days later. Leamons was able capitalize on a penalty shot early in the game, and Burns followed up five minutes later with a nice goal off of a well-placed corner kick from Matthew Storey. Leamons ended up sealing the team's 3-0 victory with his second goal of the game off of an assist by Burns just before the end of the first half.

Finally, in one of the most outstanding games of the season, the MS Warriors traveled to Bryan, TX this week to face off against a larger and numerically superior Allen Academy. The explosive and decisive, coordinated passing attack led by the Warrior offense enabled Cooper Griess to score two back-to-back goals at the four-minute and six-minute marks, devastating their opponent. Burns sealed the 3-0 victory with an assist from Griess to end the first half. The coordination and assists from Leamons, Burns, Andrew Cool and the entire team reached a pinnacle of performance this season on both sides of the ball.

In all three of these dynamic games, our tenacious and aggressive defense led by Brayden Stovall held their opponents back, securing three shutouts in a row. The Warrior defense can claim a total of seven shutouts out of ten games this season. We have seen outstanding defending and outstanding performances by our Middle School Warrior boys soccer team!

Come out and support our soccer team at the district tournament next week on Wednesday and Thursday, January 22 and 23. Teams and locations still to be determined.