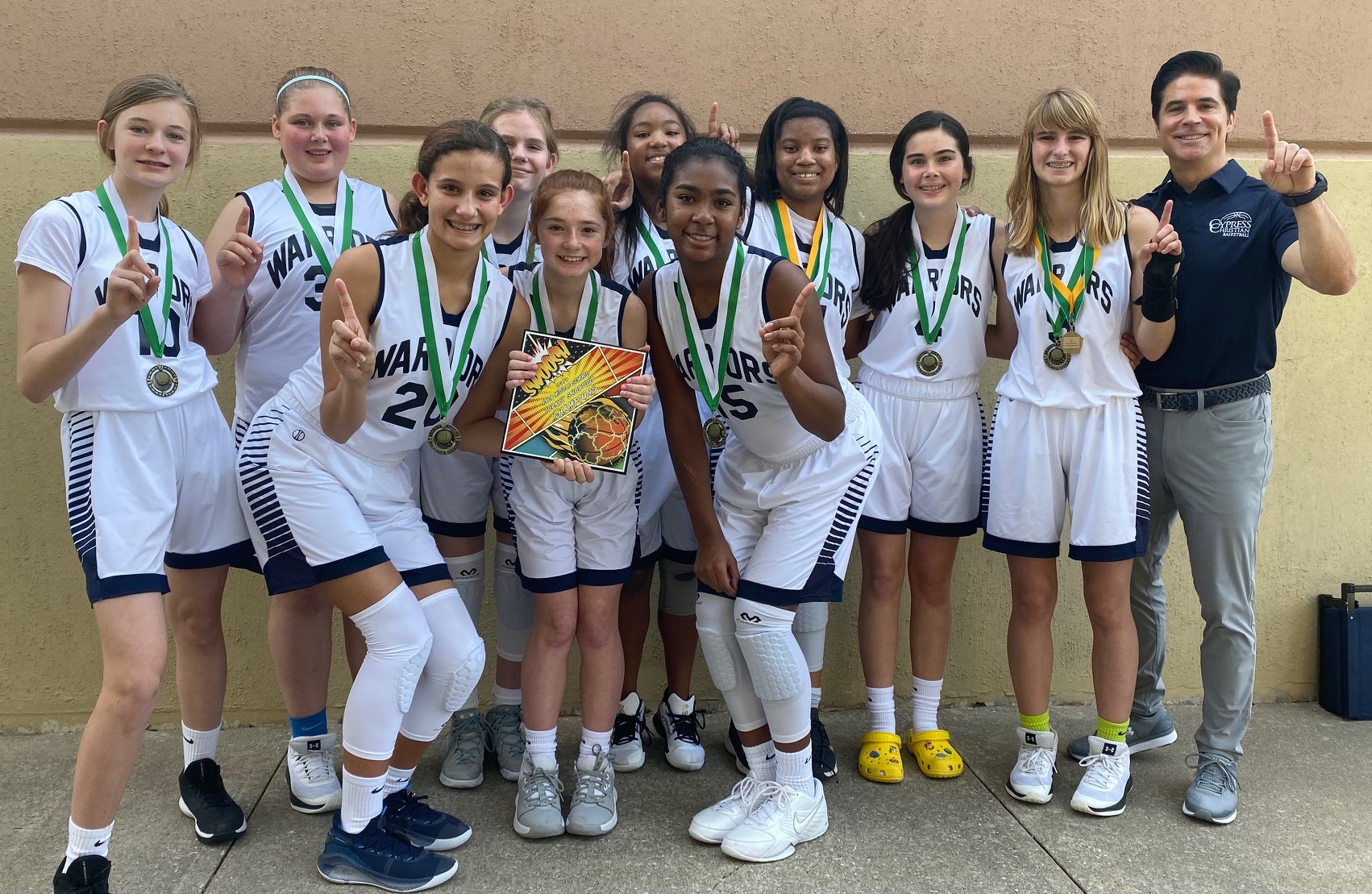 The middle school girls basketball season is off to a great start! Both the A & B teams have been working hard in practice and opened the first couple weeks of the season with three straight wins each.

The A team then traveled to Fort Bend Christian Academy to play in the FBCA Turkey Shootout this past weekend. Historically this has been a very competitive tournament and this year was no different. The Lady Warriors A team was challenged in each game as they worked their way through the tournament bracket and battled to victories over three tough teams taking first place when the final buzzer sounded on Saturday.

In the first game, CCS faced Salem Lutheran, a strong basketball program that has won the tournament the past two years. CCS controlled the game from the opening jump ball by playing aggressive defense and getting out on the fast break early and taking a 25-12 halftime lead. The Lady Warriors were able to extend the lead in the second half, led by Sarah Olenick, who finished with a game-high 15 points, Nya Graves who added 11 points, Nicole Santos with eight points and Emersyn Smith and Sophia Wanic added four and two points, respectively. Graves also had 12 rebounds and 10 steals, giving her a rare triple-double for the game. The first-round game ended with CCS topping Salem 40-19.

In the second round, CCS faced a scrappy St. Laurence Catholic School team. St. Laurence played solid defense all game and shot the ball well, however, the Warriors offense and pressure defense was too much for the Saints in the end and CCS pulled away for a 35-22 victory. Olenick played great basketball on both sides of the court finishing with 21 points, four rebounds and seven steals. Rebounding was critical in the win with Santos and Wanic pulling down nine boards each and adding six points and two points, respectively. Graves, Smith and Erika Davenport each added two points as well to round out the scoring.

In the championship game, CCS faced a talented Second Baptist team. The Lady Warriors were ready for the moment and started the game fast by jumping out to an early 9-0 lead prompting a quick timeout by the Eagles. Second Baptist settled down and was able to slow the Warrior’s momentum and get back into the game but CCS still led 11-7 at halftime. After the early fireworks by CCS, the game became a defensive battle the rest of the way. In the second half, Second Baptist employed a half-court trapping defense, but the Lady Warriors used crisp passing and quick cuts to beat the pressure which opened up scoring opportunities for the post players. During a critical stretch late in the game, the Eagles closed the gap and got within 3 points, however, in back-to-back plays, Graves cut through the defense and found Wanic in the paint for a basket and then the very next play, Graves fought through a double team, got the ball to Olenick, who drove inside the three-point line and dished the ball to Wanic who was able to finish the play with another bucket, giving the Warriors a 17-10 lead. CCS was able to stop any momentum the Eagles had and cut their rallies short the rest of the way. The game ended with the Lady Warriors defeating Second Baptist 19-16 and taking first place in the FBCA Turkey Shootout. Sophia Wanic had a game-high 12 points and added six rebounds and several blocks. Sarah Olenick added four points, Nicole Santos had two points and Nya Graves added one point. Santos pulled down nine rebounds and Olenick and Graves each had three steals. These stats don’t show the smiles that were on the Lady Warriors' faces as they celebrated together at center court and the effort and encouragement each player displayed throughout the tournament!

The Lady Warriors capped off the weekend by attending the Rice vs Texas A&M women’s basketball game at Tudor Fieldhouse on the beautiful Rice campus. The girls were able to participate in several fun fan experiences which included watching warm-ups from the baseline and taking part in the fan tunnel on the court as the Rice team was announced – the girls even made the Jumbotron “Dance Cam”! The game did not disappoint as the girls watched two of the best college teams compete and Texas A&M edged out Rice by one point with a bucket in the final seconds of the game.

The Lady Warriors are excited about the start to the season, but understand that they need to improve each week individually and as a team as they continue to learn how hard work and great effort allows them to have success on the court and glorify their Savior, Jesus Christ, with the talents they have been given. 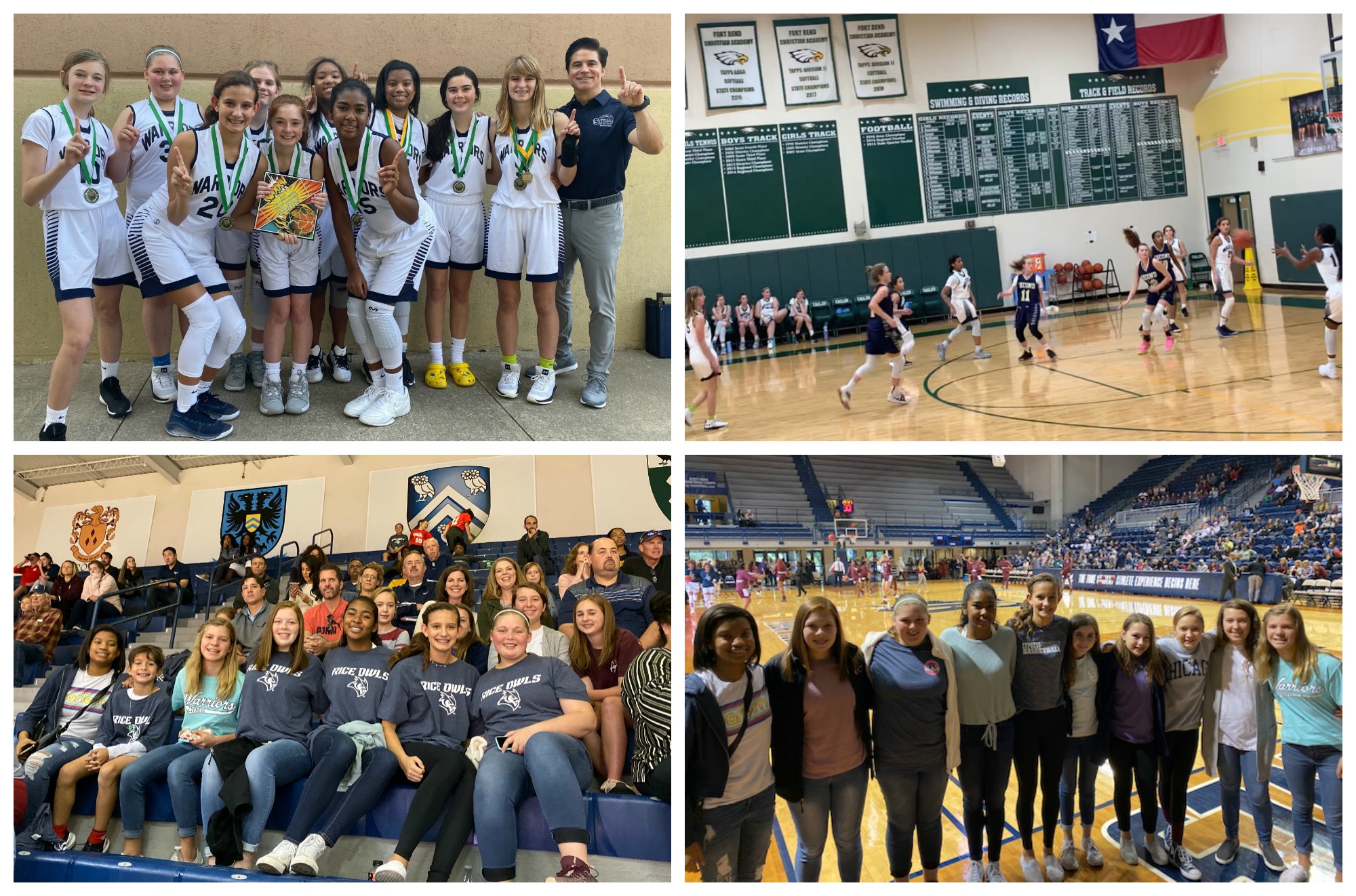