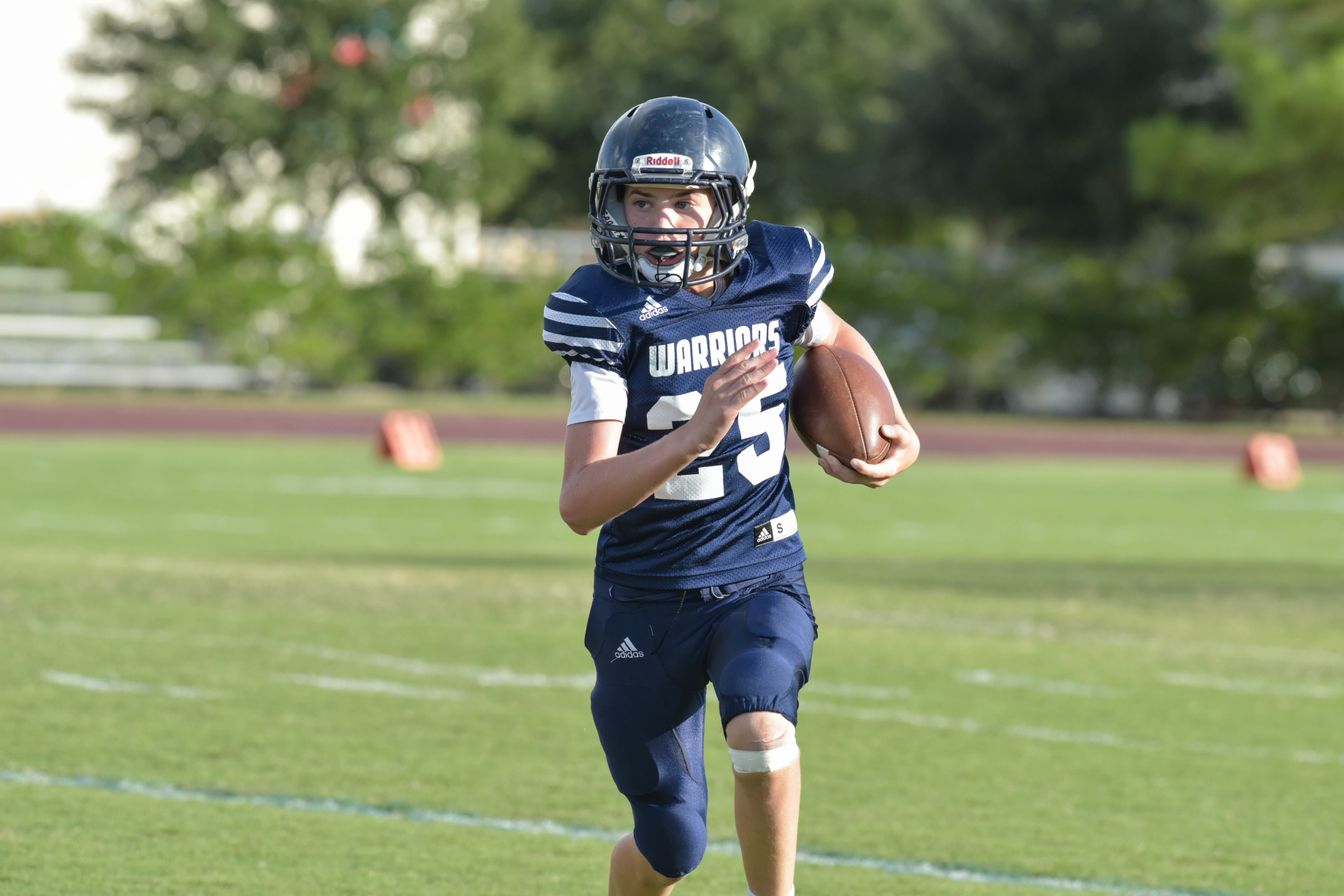 As we move into the final two weeks of the middle school football season, both teams had strong performances as the B team traveled to Western Academy and the A team hosted Rosehill.

In the B team game, the Warriors scored on their second play of the game when quarterback Grayson Petru threw a screen pass to Warren Haudek and the running back made several defenders miss and used his speed to race 45 yards up the left sideline into the end zone. On their second possession, Haudek took another screen pass, this time on the right side, and was able to get around the cornerback in the open field and reached the end zone for the second time. The Warrior defense did their job as well and held the Western offense in check as Western had to punt the ball each possession in the first half. As time was running out in the first half, the Warriors offense dialed up a double pass play when Cody Mabry passed to Grayson Petru behind the line of scrimmage and then Petru threw a long pass to wide receiver Carson Spenn who made several cuts and ended up making his way to the 10-yard line. With seconds left on the clock, Petru was able to reach the end zone as he tucked the ball on a read play and ran behind the right side of the CCS offensive line. It was a great team effort as each player contributed and over 10 different players touched the ball on offense. The Warriors won the game 22-6 and their record is now 5 wins and 2 losses with one remaining game.

In the A team game, the Warriors drove the ball down the field quickly on their first possession and capped it off with a bruising 3-yard run by Jacob Rauch up the middle. Rosehill came right back and made it all the way down the field to the 9-yard line. However, the Warrior defense stiffened up and stopped Rosehill on fourth down and four yards to go as William Ellisor rapped up the running back just shy of the first down marker. That would be the closest Rosehill would come to the end zone for the remainder of the game. After that stop, the Warriors took possession of the ball on their own 5-yard line and methodically moved the ball down the field. The 95-yard drive ended with an 8-yard pass from JD Potts to Wade Butler. On the next kickoff, the Warriors received a favorable bounce and were able to recover the kick, giving the ball back to the CCS offense with less than a minute to go in the half. On the first play, Luke Wisenbaker took the handoff and darted up the middle of the field reaching the 8-yard line. On the next play, Potts hit receiver Cooper Griess on a slant route giving the Warriors a 20-0 halftime lead. The Warriors scored again at the start of the fourth quarter when quarterback Beckett Swinney threw a nice ball to the corner of the end zone to Brayden Stovall for an 11-yard touchdown. The final score was 26-0 Warriors bringing their record to 6 wins and 0 losses and a spot in the championship game which is set for Saturday, October 19 at 6 p.m. The game will be played at Concordia Lutheran High School. CCS will face Saint Vincent DePaul and it should be a great middle school football game as these two unbeaten teams battle for the district championship.