Lady Warriors, We are Proud of You! 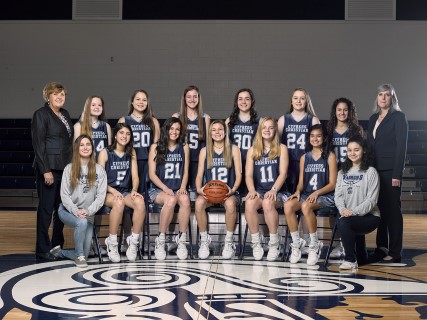 Every season brings its own trials and this season had some we were not prepared for and many that we learned to persevere through. The girls, though small in numbers, learned and grew in abilities from beginning to end. We had two young ladies join us this year that had never played organized basketball before. The rest of the team rallied around them and encouraged them.

District play was both tough and great! The varsity girls played the best game of our season against last year’s TAPPS 4A State Champion, Lutheran North. For much of the second half, we held them to only a nine-point lead. We fought hard and just could not catch them, but their coach praised our girls for how hard they played against their Division I signee. As we neared the end of district play with much-needed wins to gain, we got hit with illness and injury. We know that life is not fair, but it sure is hard to accept sometimes.

Needless to say, we didn’t make the playoffs this year, but we made a difference wherever we played. We showed character time after time when facing challenges, and we helped two young ladies learn how to be teammates. We also learned a great deal about our team and ourselves. These girls were a fun team to coach and though we lose three great seniors, we gain much in knowledge and ability and begin preparations for next year.

God was there in every part of our season, teaching us so many lessons. We heard prayers to Him in Chinese and we showed each other the ability to help, encourage and build each other up. For the Lady Warriors, it was a great learning experience. We will be stronger and we will move on. For our seniors, we loved every minute with you and look forward to your great accomplishments in college.