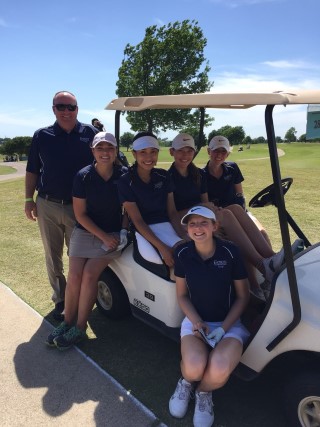 The CCS girls golf team competed in the TAPPS 4A State Golf Tournament at Cottonwood Creek Golf Course in Waco. The two-day, 36-hole tournament was played on Monday and Tuesday, May 1-2. CCS was represented by not just one student, but a team of five girls for the first time in many years, with the team placing fifth in scoring. The team was comprised of one junior, Madelynn Beckman, and four sophomores, Charlotte Achterkirch, Melanie Alvarez, Emily Nicholson and Kara Otts.

The weather conditions, other than being a little windy at times, could not have been better, as the competitors battled a tough course. Since most tournaments are single day events, this two-day tournament was not only demanding in terms of managing the course, but also in terms of endurance, as the girls played afternoon rounds on Monday and morning rounds on Tuesday.

All of the girls played their best rounds of the year, and as a team, the girls' scores improved by 12 strokes from day one to day two. Additionally, Kara Otts finished in 12th place overall for the tournament.

Although the season has ended, the future looks very good for the Warrior golf team, as the team is only graduating two seniors. Overall, this season has been the most successful in many years, with both boys and girls teams advancing to regional play, following a district championship for the girls, and then, of course, to the girls competing in the state tournament.