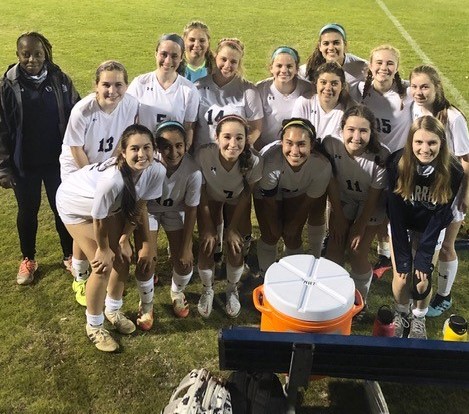 On Thursday, January 14, the Lady Warriors soccer team traveled to Kerr Field to take on the Lady Eagles of Faith West Academy.  The Warriors were well prepared for this match. Early and aggressive play by the Warrior offense earned them six goals in the first half. The stingy defense allowed little to no penetration into their half of the field giving up no goals. In a showing of good sportsmanship, the Lady Warriors enacted an "increased passing" strategy in the second half, giving up no goals and scoring one for a final score of 7-0. An impressive victory by our Lady Warriors!

The Lady Warriors took the pitch on Tuesday, January 19 vs. the Lady Lions of Lutheran North & had another dominating performance with a 7-0 victory. Faith opened the scoring at the ninth minute and added to the tally at the 10-minute mark assisted by Remi. Rachel capped off the half with a nice strike to make it 3-0. The scoring continued in the second half with goals from Verena, Anna, Gillian & Remi. Another clean sheet from the defense as the Warriors look to continue their district dominance.