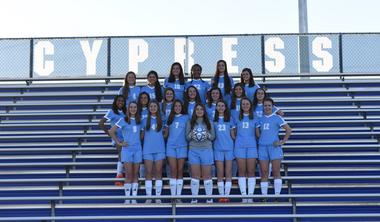 The CCS Lady Warriors had their season end in regional play with a loss to Kerrville OLOTH 3 – 2. The score does not do this game justice. Both teams fought valiantly through 80 minutes of regular time and 20 minutes of overtime to have this amazing contest be decided by penalty kicks.

The five seniors, in their last match together, showed grit and determination rallying from a 2 – 0 deficit with eleven minutes left in regulation time. Captain Lexi Kemp cut the lead in half as she scored off a pass fed in to her by her fellow captain Korey Cyr. The Warriors continued to pressure the Hawks and with seconds left in regulation a hand ball infraction was called against Kerrville. With no time remaining on the clock, Korey Cyr netted the tying goal forcing overtime. Twenty minutes of overtime was played and the scored remained even and the teams lined up for penalty kicks.

Emily Boyd, Audrey Floyd and Korey Cyr each were successful on their final shot of their high school career. Lauren Storey also made her penalty kick. But the stat of this game does not show up in the score book. Venessa Moreira and Emma Muehlenbrock kept two fantastic Hawk players frustrated and at bay for the entire match. Abigail Davis made several outstanding saves to keep the game close. The entire team played and battled to the very end and should be proud of such a performance.

Thanks as always to the amazing CCS fans who turned out for this epic game. Fan support is a huge part of the success of this team. As for the team's seniors - Boyd, Cyr, Floyd, Kemp and Moreira - saved their best for last, they gave it their all. Fans and coaches enjoyed watching these talented athletes play this game for His glory!  Go Warriors!