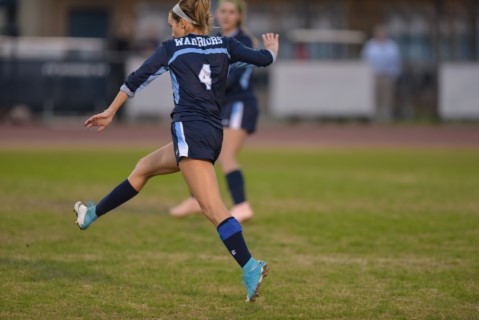 The CCS Lady Warrior soccer team is approaching the end of the regular season and both the varsity and junior varsity teams are playing some of the best soccer of the season. The varsity team is currently in second place in the district. Last week, the Lady Warriors earned a 6-1 victory over Westbury Christian and a 5-0 winning finish against Cristo Rey Jesuit.

This season marks the first time that the Lady Warriors have fielded a junior varsity team and the girls claimed their second win of the season this week with a thrilling finish against Northland Christian. CCS found themselves behind, losing 0-1 at halftime, but tied the game up in the closing minutes and outdueled Northland in a penalty kick shootout to claim the victory.

Come out and support Warrior soccer on Monday, January 21 as we honor our seniors in the final home game of their high school soccer careers. CCS will be playing Frassati Catholic at 5 p.m. and 7 p.m. with a ceremony in between the games to honor the seniors, which will take place at 6:30 p.m.