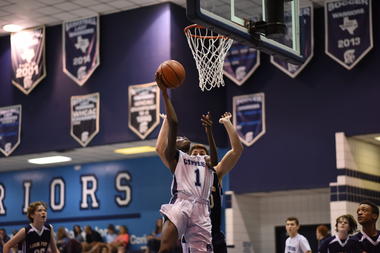 The JV boys basketball team has come together to overcome obstacles, and has shown great improvement since the beginning of the season. Now in their mid-district stride, the team, led by junior team captain Zach Sanders, is showing how great they can play as a group, and how much fun it is to play as a team with chemistry. Other leading contributors are freshman point guard JP Ademola and freshman center Josh Yough who have stepped right into their roles as the heart and energy of the team.

With every practice and with every game this team improves. One great example of this is the Bay Area Christian competitions where in game one at home, the team lost badly, but then when they traveled to Bay Area Christian for a second game, they played within 2-3 points of their opponent the entire game with an opportunity to win in the last seconds of the game. Though the scoreboard showed a 42-39 loss, the JV boys never gave up and played strong on both the defensive and offensive sides of the floor.

CCS is very proud of these boys and looks forward to them making continued progress as they not only finish the season strong, but prepare for a great season next year.