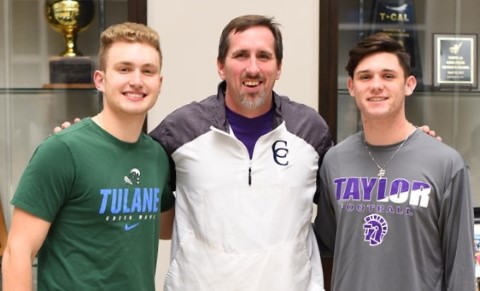 The Warriors signed two outstanding football players to the next level on National Signing Day. Josh Holl will play for Tulane and Austin Henry for Taylor University. "It was exciting to see the reward for their hard work. Two summers ago, Josh and Austin both made every summer workout and helped set the tone for our team. The result was a 23-3 record, a long list of shattered school records, a division title and a TAPPS Division III State Championship. Both players were preseason player of the year and post season finalists for the Touchdown Club's player of the year awards and it was well deserved." Coach Spenn went on to say, "They are also excellent examples of the kind of student athlete we have at Cypress Christian School. I am excited for them to take this next step in their education on and off the field."

Josh Holl compiled 3,150 passing yards, a 54.6% completion percentage and 51 touchdowns; all of which our school records. While he was signal caller for the Warriors, the offense was explosive in every phase.

Austin Henry racked up 101 total tackles (38 solo and 63 assists), 13 sacks and 13.5 tackles for loss in his senior season. His 13 sacks shattered our old season record of seven. His leadership, determination and enthusiasm on defense was contagious.