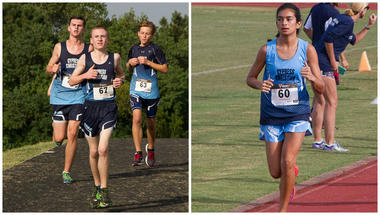 The high school cross country team competed against thirty Houston area high schools at the Dave Jantzen Invitational. It was a great day for racing with the varsity boys team finishing in fifth place and the varsity girls finishing in fourth place. Daniel Macune and Landon Overton led the charge for the Warriors with both runners finishing in the top 10. On the girls side, Sophia Slabic ran her fastest time of the season and out ran nearly 75 runners for a top 10 finish. For the day, the Warriors finished strong - setting 16 personal record times and six season record times. The cross country team travels to the St. John’s Ramble on Sat, Oct. 8, which will be held at TC Jester Park and begins at 8 a.m.