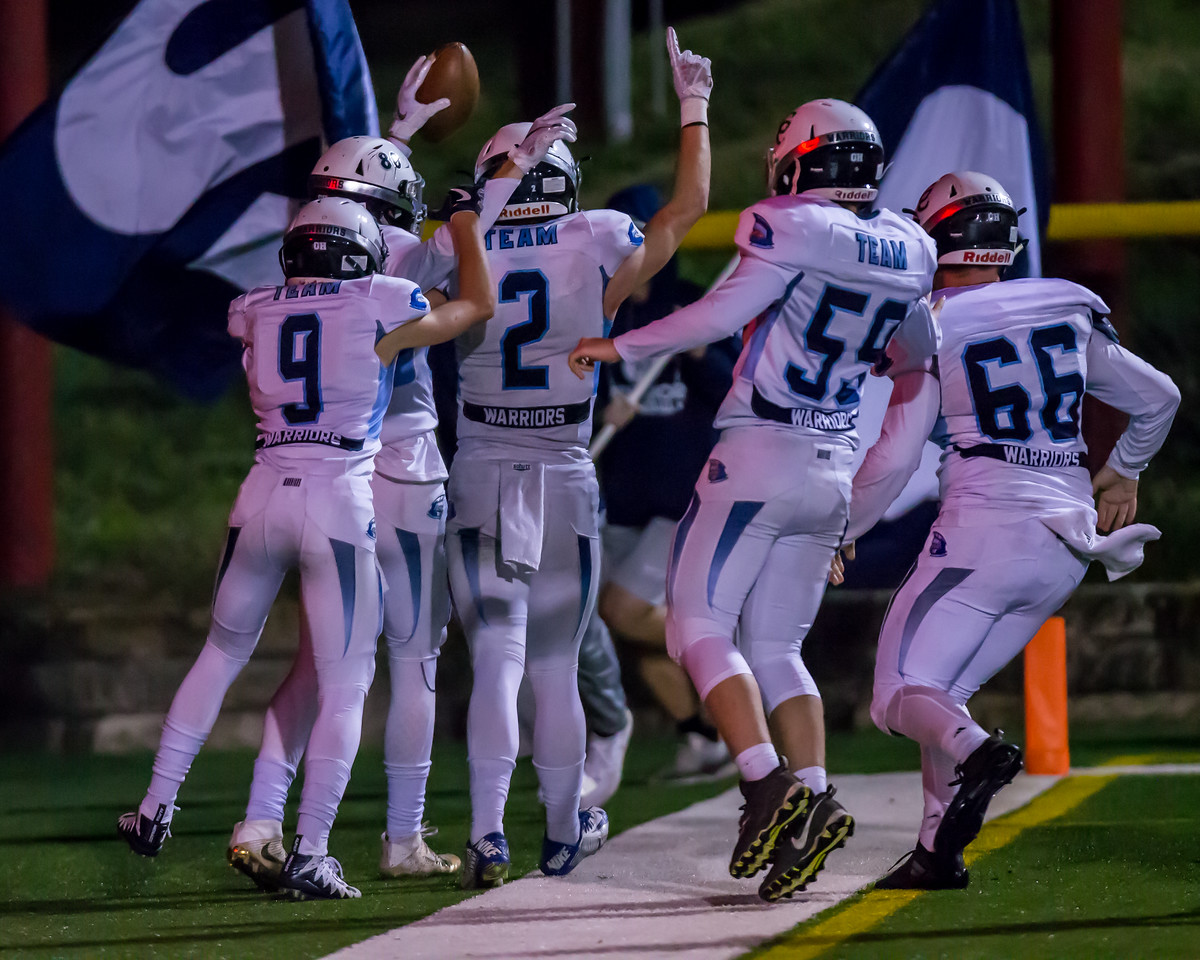 Nov 21 2018
In the closing seconds for the second straight week, the Warriors pulled out an improbable victory. Coach Spenn passed on an easy field goal with seven seconds to play as the Warriors trailed 17-14. Drue Hirth threw a strike to Joseph Carbone in the back of the end zone to give the Warriors the 21-17 victory, the same score that propelled them into the playoffs the week before.
The Warrior offense seems to be at its best in the last few seconds of the half. Hirth found Christian Fleischhauer for a spectacular catch at the end of the first half from 45 yards on a fourth down play to tie the game at 14. CCS scored all three touchdowns on fourth down plays and has scored at the very end of the last three halves of football they have played.
"Coach Petersen and his team at Hyde Park are a class act," Coach Spenn said. "It was a great game and truly a shame that one team had to lose. Both teams played hard and with great respect for the game and each other."
While the offense grabbed the spotlight late in each half, it was really a defensive battle all night long as both teams were under 300 yards of total offense. Daniel Macune broke the school record for tackles with 21 total tackles on the night. The senior linebacker weighs just 132 pounds, but should easily set the single-season record for tackles against Second Baptist on Friday, which currently stands at 142 by Jase Clark in 2011. The Warriors came up with four sacks and seven tackles for loss. Collin Tate and Wesley Hong each recorded two sacks. The Warriors only gave up 33 yards on the ground. Christian Fleischhauer did a masterful job defending Hyde Park's very talented top receiver. The defense forced three turnovers on the night and came up with three fourth down stops. A sack by Tate and another by Tate and Hong together helped the Warriors force a three and out before the last drive that gave the Warriors the victory with only seconds to spare.
Another key component was the punting game. Jackson Landrum continually flipped the field for the Warriors. He had six punts with a 39 yard average. None of the punts were returnable. At the same time Fleischhauer moved the ball into Hyde Park territory with a 16 yard return that almost broke into the open to set up the last drive of the game.
Hirth finished the night 15 of 35 for 208 yards and three TDs. Carbone finished the game with seven catches for 100 yards and two TDs.
Coach Spenn earned his 80th win as a head coach at CCS. The Warriors improved to 8-3 as they head into a rematch with Second Baptist on Friday. The Warriors lost the first game 38-10, but it was tied at half and a 14-10 game late in the third. Under Coach Spenn the Warriors have now reached eight wins or more in five of the eleven seasons.
The Warriors will play Second Baptist at HISD Delmar Stadium, 2020 Mangum Rd., Houston, TX 77092 on Friday at 7 p.m. for a chance to go to the final four. CCS has now won five straight playoff games including their first in school history in TAPPS Division II last week. A victory will earn the Warriors a second chance at Austin Regents or possibly a very good team from San Antonio, Holy Cross. Friday's game is just a 20 minute drive from campus, so make plans to support the football team on this holiday weekend.