Boys Track and Field are 4A State Champions! 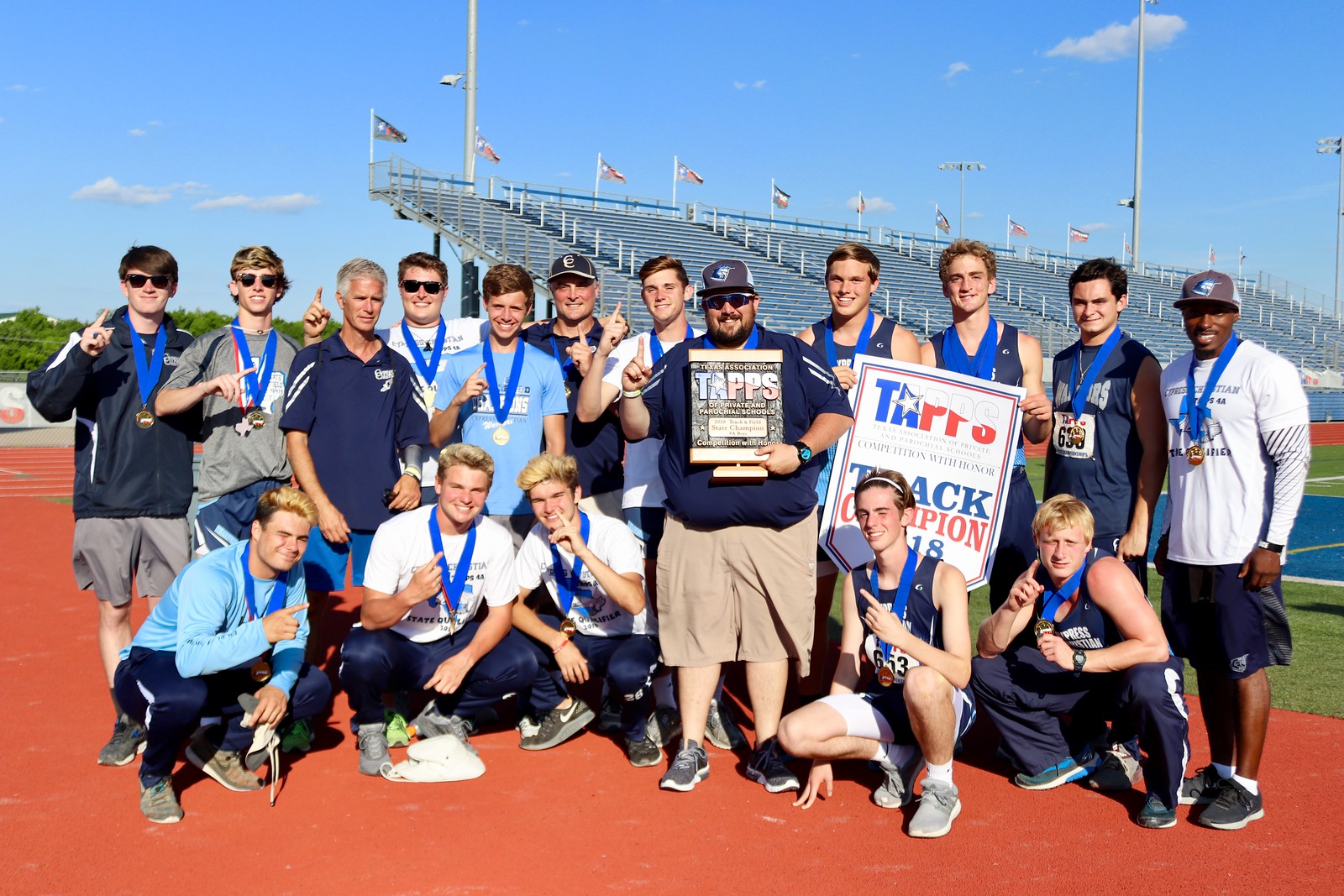 CCS Track and Field took 12 boys to the TAPPS State Track and Field meet on May 4-5 in Waco. Previously, the boys team had won the District meet and the South Regional meet, so the team believed they had the opportunity to win the State meet. However, 26 other 4A schools were going to state with the same intentions. Friday was field event day and it was a rough start as the boys prepared to begin Triple Jump at 9 a.m. Just as the event was to begin, the rains came and the meet was delayed. This began a long day of sitting and waiting to compete. Weather was an issue and the meet continued to be delayed until 4 p.m. when it finally began to clear enough to get everything started. The team got ready to compete in very wet conditions and the State meet was underway.

Triple Jump was the first event and John Ethan Baldwin won first with a jump of 43’8.75” and Tyler Landua took second with a jump of 42’ 3.75”. John Ethan also won first in the Long Jump with a leap of 21’ 8.5”. At the end of the day, literally throwing in the dark, Foster Paulsen and Gary Bittick competed in Shot Put. In extremely wet conditions, the boys competed well. Gary fought hard and ended with a 7th place finish of 39’, earning the team some much-needed points. Foster had his best day in the shot ring with a toss of 45’3” tying him with another competitor. They each put the shot one more time and the other young man literally threw ¼ inch farther than Foster to take first. However, Foster’s second-place finish earned more points for the Warrior team and Foster an incredible end to his senior season. The team ended Day 1 sitting in first place in preparation for the running events on Saturday.

On Saturday, the team awoke to sunshine and a great day to compete. The 400m. relay was up first with Ian Jones, John Ethan Baldwin, Jackson Landrum and Christian Andrus, but it turned out to be as tough a race as this relay can be. The team was disqualified for an exchange out of the zone, so the challenge was really on the boys to continue to fight hard and earn the points in other races, knowing other teams saw an opportunity. We moved on to the 110 hurdles with John Ethan Baldwin, Tyler Landua and Connor Newell. It proved to be a tough race with Tyler getting disqualified for movement in the blocks, and Connor having a tough race. The bright spot was John Ethan won gold in the race, even beating the times of other State Champions in the other divisions.

Christian Andrus competed in the 100m. dash and earned 7th place getting more points for CCS. The 800m. relay made up of Christian Fleischhauer, Jacob Hotchkiss, Austin Henry and Jackson Landrum captured the bronze medal for the team. The 300m. Hurdles was the next event for Cypress Christian with John Ethan, Tyler, and Austin taking to the track. John Ethan won first and Austin earned second place, each with their best times, and Tyler placed fourth just .02 seconds behind third. This was well-needed 23 points for the team. Christian Andrus and Jackson Landrum competed in the 200 m. dash and Christian earned 6th and Jackson 8th place, giving the team the last points they could earn. Now it was time to just sit, wait and pray that no other team earned more points than Cypress in the last two events. It became a waiting and math game as the team watched others compete, watching two schools closely. In the end, Coram Deo did earn the same amount of points as CCS so that made the two teams Co-Champions of the 4A division, but Cypress Christian hung on and fought hard to stay in the top spot.

Through the process, John Ethan was recognized as the 4A Top Male Athlete of the State meet. Earlier, he had been recognized as the South Region 4A Top Male Athlete. The team was awarded the Championship banner and the medals, and the celebrations began. Cypress Christian is proud of these 12 young men who fought hard through adversity and learned even more about perseverance. That State Title is definitely sweet!