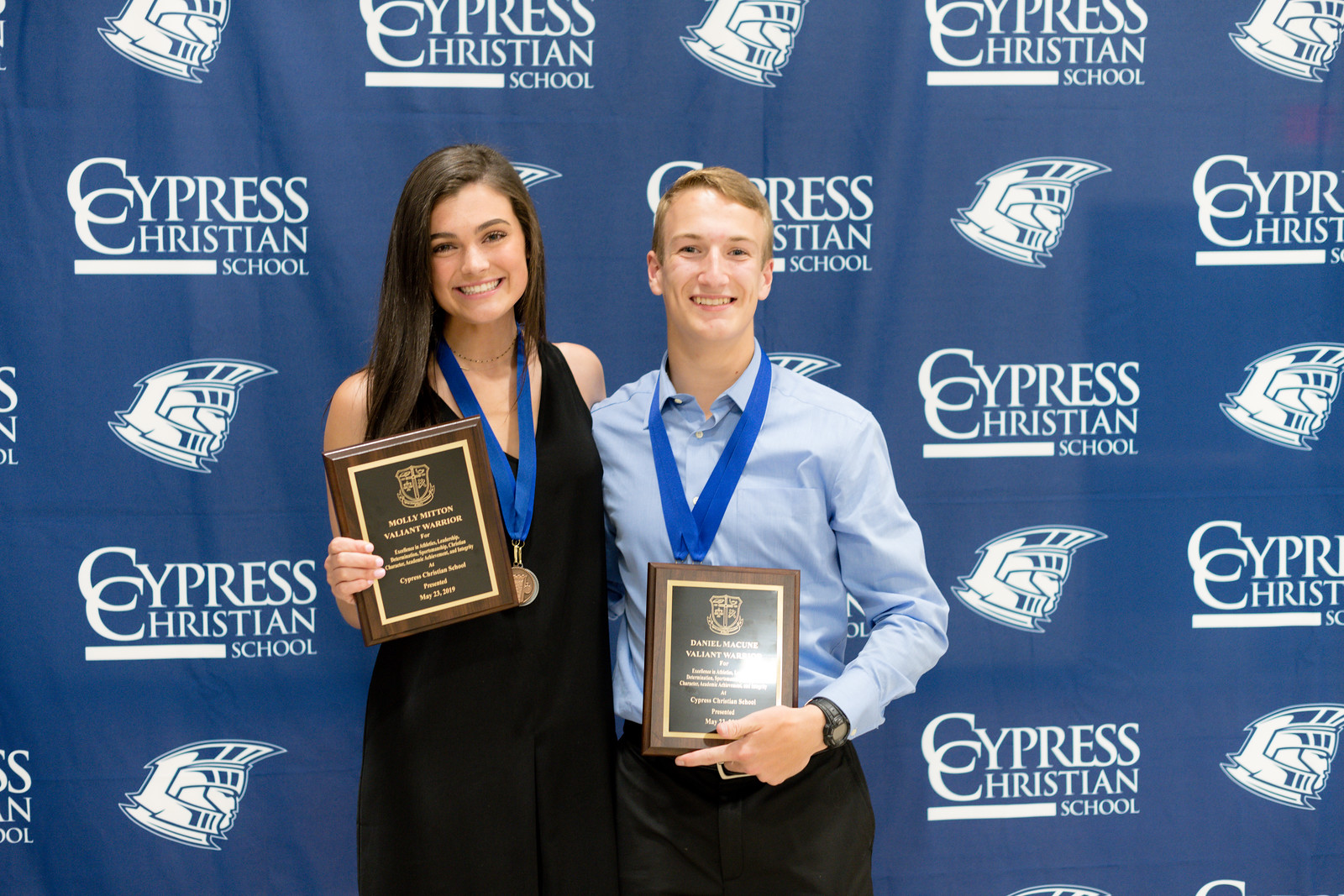 On Thursday, May 23, 2019, the Cypress Christian School Athletics Department hosted an awards night in the East Gym.

The opportunity to be challenged and reach toward a goal together with your teammates is a privilege that our student-athletes have shared regardless of their season outcomes. The courage and grit to go toe-to-toe with an opponent teaches us how to maintain our character and fight for our teammates and for victory. Our coaches have helped guide and celebrate victories that are both on the scoreboard and in the heart of personal and team achievement. What a wonderful year it has been!

Offensive Player of the Year:

Defensive Player of the Year:

The Timothy Award is one of the highest awards given to a team member. This award is based on Timothy from the Bible, a young man who was strong in his faith and was willing to take a stand even though he was young. Paul even encourages him to stand strong in his youth, even when circumstances are hard. As Christians, we all know how hard it is to take a stand and athletic events are a true test. This is the award that we give to that individual who has indeed worked hard, has stayed consistent for a long time, encourages their teammates, and tries their best to do the right thing. “The winners of the Timothy Awards are athletes who look for ways to go above and beyond in ways that they show their Christian faith while competing

The TAPPS All-District, All-Region and All-State awards were voted on by the coaches of the district schools CCS plays against. These coaches might a student one or two times per year but in those few moments they really stood out.

Swimmer of the Meet - Elliott Jones

Academic excellence is a core value of the CCS mission statement. The Academic All-State award provides an opportunity to recognize individual students who were true to CCS core values and thrived for excellence on the court, field and classroom. This award is given to athletes that have not only shown tremendous ability on the field, but they have also shown themselves to be dedicated students in the classroom. These students must be a junior or a senior, have been named to the All-District team and must also have an academic average of 90% or better. In individual events, students must qualify for State and be juniors or seniors with an academic average of 90 or better. This award is the definition of excellence.

Our athletes spend 20-30 hours per week at practices and games and this is in addition to the hours they spend each week in the classroom and working on homework. Some athletes have chosen to participate in two or three sports this school year and a few athletes have played multiple sports for multiple years. The athletes receiving this award have played two or more sports each year for at least three years, including their senior year.

The Valiant Warrior Award is given to one male and one female senior student who is recognized for excellence in athletics through leadership, determination, sportsmanship, Christian character, academic achievements and integrity.

The young lady who was voted as our Valiant Warrior for 2018-2019 is a bright light. She is a hard worker but loves to have fun. Her positive energy, excitement and perseverance through all challenges has been an encouragement to her teammates. She is diligent in all she does and others see the difference she makes. She commits to playing her role well, but spends time sharing with her teammates to make the team better. She is her teammates’ biggest fan and she is willing to play where she is needed. She is a competitor and will stand up to anyone, while appreciating their strengths and looking to improve herself.

She has earned All-District and Academic All-State awards in her sports and she began a new sport her senior year and immediately rose to the top.

Behind that sweet smile and fun-loving personality is a young lady who strives to be the best in everything she does, but not for the recognition. That is how God made her. She is a natural athlete and she has been a joy to coach, as all the coaches will testify. She was incredible on the net, in the pool and on the basketball court every year. This year she added softball to her list and made a big difference. Our Valiant Warrior is Molly Mitton.

As we considered the tremendous athletes in this year’s senior class we looked for athletes who are dedicated and committed to their sport and to their teammates…a young man who will lead his team by example, setting the standard high. We look for his classroom abilities and the determination he possesses to continue through adversity as well as the good times. As we looked through many great candidates one man stood out as our Valiant Warrior for 2019.

This young man is one of the best examples of excellence on the field and in the classroom. He is a great team player, supporting them, encouraging them and giving his best, leading by example. He is a diligent worker in the classroom and on the field. He is truly committed to all that he tackles (pun intended). This young man has given his all for four years in football, cross country, soccer and track & field. His determination and diligence has earned him an appointment to The U.S. Military Academy at West Point. He looks at challenges as exciting and he is going to continue to be a big success because he understands the value of hard work. This young man is an inspiration to players, coaches and administrators. Please join me in welcoming our 2019 Valiant Warrior, Daniel Macune.

He is receiving another award tonight. Each year high school football coaches may nominate a player for the Brandon Burlsworth Character Award. This year Daniel Macune is the recipient of this award for his Outstanding Character and Sportsmanship.