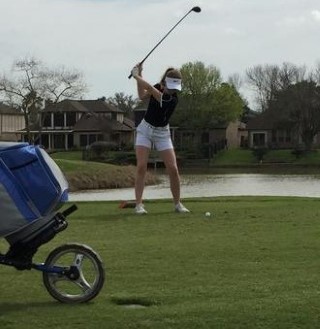 Nine members of the CCS golf team competed in the Fort Bend Christian Invitational Tournament on Tuesday, February 28. The tournament was played at Quail Valley Country Club's El Dorado course. This was the first outing of the season, on a very difficult course, as CCS was represented by seven boys and two girls.

Junior Noah Lee, was the low scorer on the boys' team, with a round of 95, while sophomore Melanie Alvarez was low scorer on the girls' team. Also competing for the boys was senior Michael Pogson, juniors Nathaniel Richardson and Scott Steinhauser and sophomores Jason Hall, Jacob Hall and Jacob Hotchkiss. Sophomore Charlotte Achterkirch was the other member of the girls' team to compete.

Although the scores on the day were higher than the players would have liked, it was good to get the season started. Up next for the Warriors is the St. Thomas Episcopal Golf Invitational on Monday, March 6.  The team will head back to Quail Valley to play in the second of four tournaments on the schedule before the TAPPS district tournament on April 10.