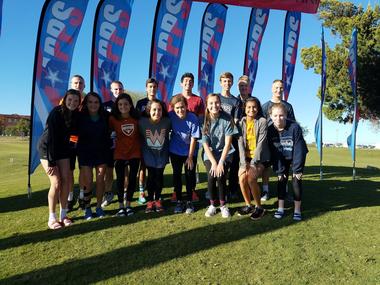 The CCS Warriors successfully crossed the finish line of the 2017 season this past week with participation in the TAPPS 4A State Championship and the Team Awards Celebration. The boys team consisted of Landen Overton, Garrett Velez, Daniel Macune, Jason Hall, Jacob Hall, Ben Bezner and Beto Vasquez. The boys finished 12th in state and were led by Garrett Velez who finished 30th in state and Landen Overton who was one second behind Garrett and finished 34th in state.

The athletes gathered for the final time last weekend when Coach Jeff Mudrow, Coach Chad Overton and Coach Becky Fredrickson awarded the team with their Varsity Letters and presented several special awards. Landen Overton and Sophia Slabic were awarded the “Runner of the Year” award. Casey Barbisch and Emma Muehlenbrock earned the “Runner’s Heart” award, given to a runner who displays exceptional courage and an ability to overcome any obstacle. Ben Bezner and Brooklyn Bretz were recognized with this season’s “Most Improved Runner” award. CCS also awards the “Timothy Award,” which recognizes specific examples of Christ-like character and attitude. Ben Bezner and Susannah Hotchkiss were recognized as “Timothy Award” recipients for showing courage in the face of adversity and a consistent positive attitude that inspired their teammates to greater and greater success.

While the finish line is the conclusion of one race, it means that the Warriors Cross Country program is only a few steps away from the next starting line with track season beginning in January.