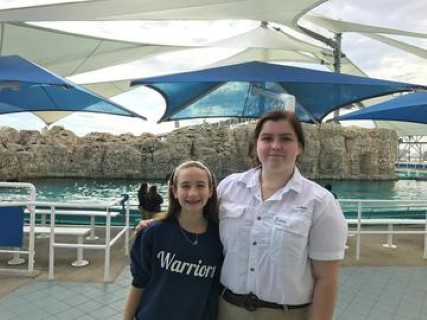 Lina Parodi ('16) is majoring in marine biology at Texas A&M-Corpus Christi and is pleased to report she made the Dean's List last semester. Her goals include owning an aquaculture lab to establish man-made coral reefs. In her spare time, she volunteers at the Texas State Aquarium and at Glen Oak Therapeutic Riding Facility, a Christian organization that helps disabled individuals through horseback riding. She also participates in area art shows. Shown in photo with Lina is current CCS fifth grade student Sophia Swanton who was visiting the aquarium during Lina's volunteer hours. Lina noticed Sophia's Warrior t-shirt and introduced herself as a fellow Warrior.

Jordan Gray ('11) graduated with honors from San Jacinto Maritime Academy in May 2016 with a degree in marine transportation. In addition, he holds a 200-Ton Masters License (Captain) with the U.S. Coast Guard for near coastal and western rivers. He is a steersman for Cheryl K. Marine, a marine charter company that provides transportation of all kinds of petroleum products as well as dangerous liquids and gas throughout the Gulf. Jordan plans to continue his career in the maritime field, upgrading his license and expanding his knowledge of the maritime industry.

Jade Harper Gilbreath ('14) and husband Jackson welcomed their baby boy, Josiah, on January 25, 2017, at 12:04 a.m. He weighed 6 lbs., 14 oz., and measured 18 and a half inches. Jade reports that they are doing well and says, "He is seriously the easiest baby ever. We are so blessed and so happy to have him. He is so loved!" Jackson and Jade are stationed at Minot Air Force Base in Minot, North Dakota. Jade is finishing her degree in art while Jackson works on acquiring his pilot's license.