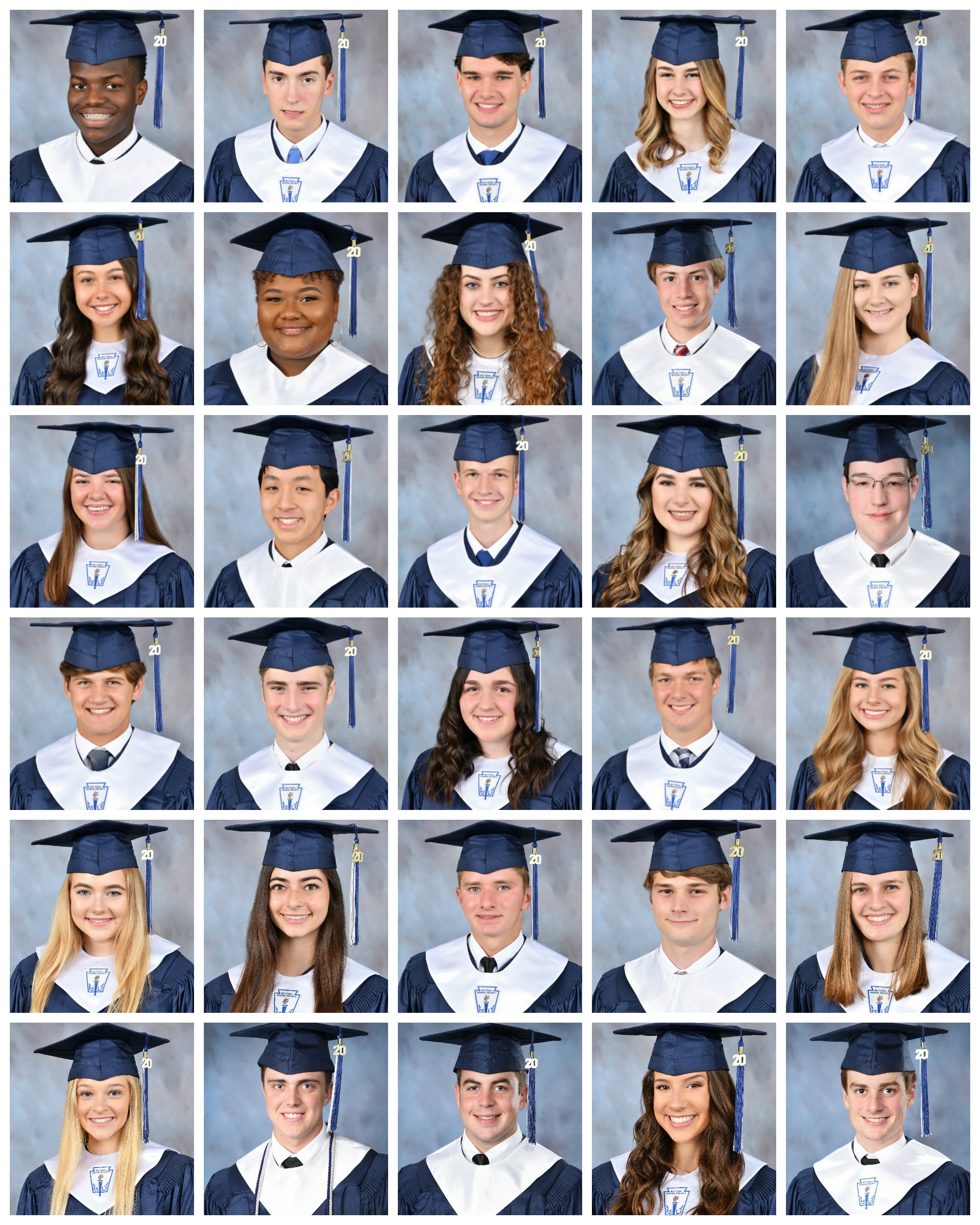 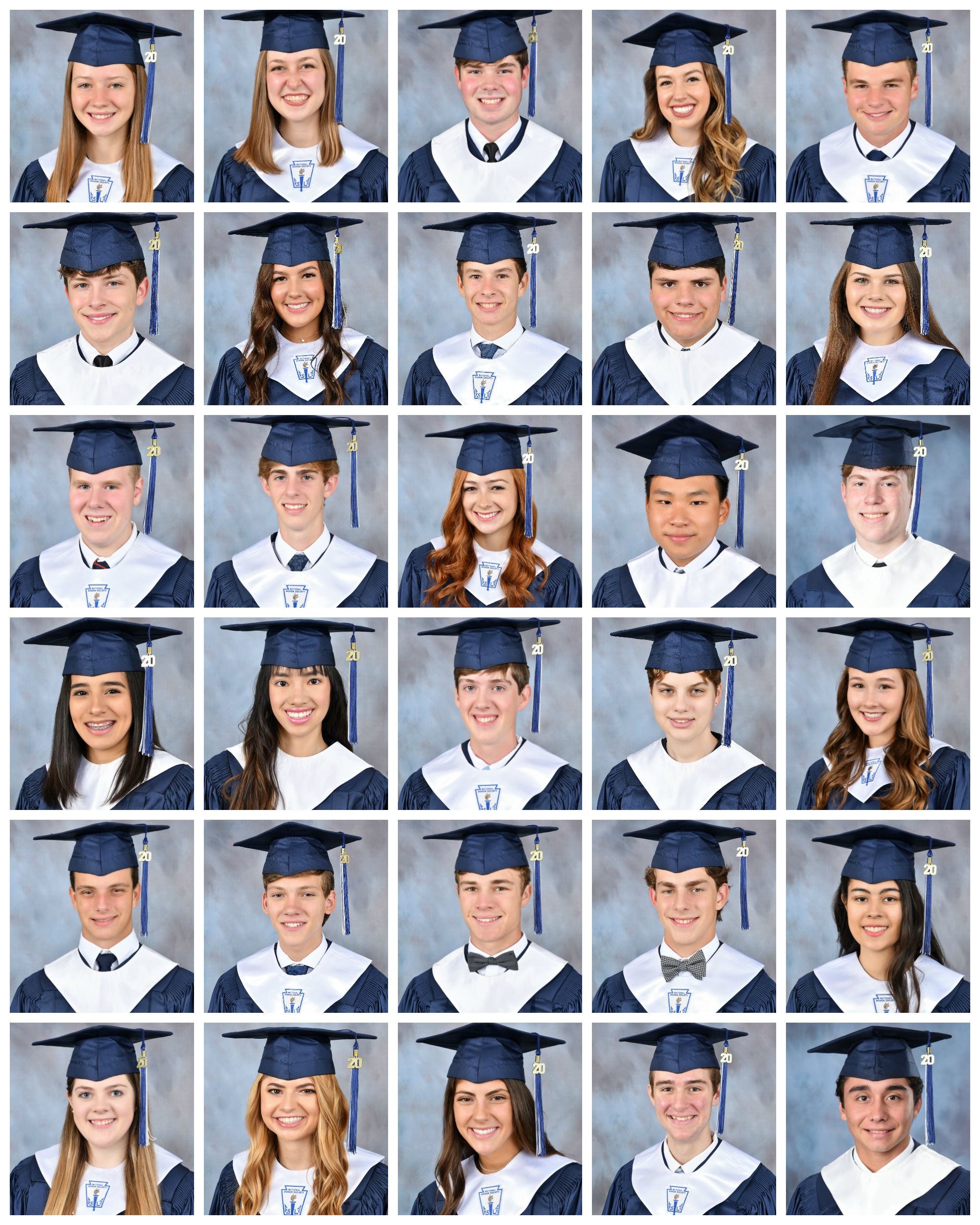 The class of 2020 began the next chapter in their lives after their commencement ceremony on Friday, June 19, 2020. They fondly look back on the memories they've shared and anticipate the unique plans God has for each of their lives. They hold fast to one truth from Ephesians 2:10 - We are His workmanship, created in Christ Jesus for good works, which God prepared beforehand, that we should walk in them.

Graduates (100%) were accepted to colleges and universities throughout the U.S. with many earning academic, athletic and leadership scholarships. Click here to view the graduation program listing graduates and where they plan to attend college. 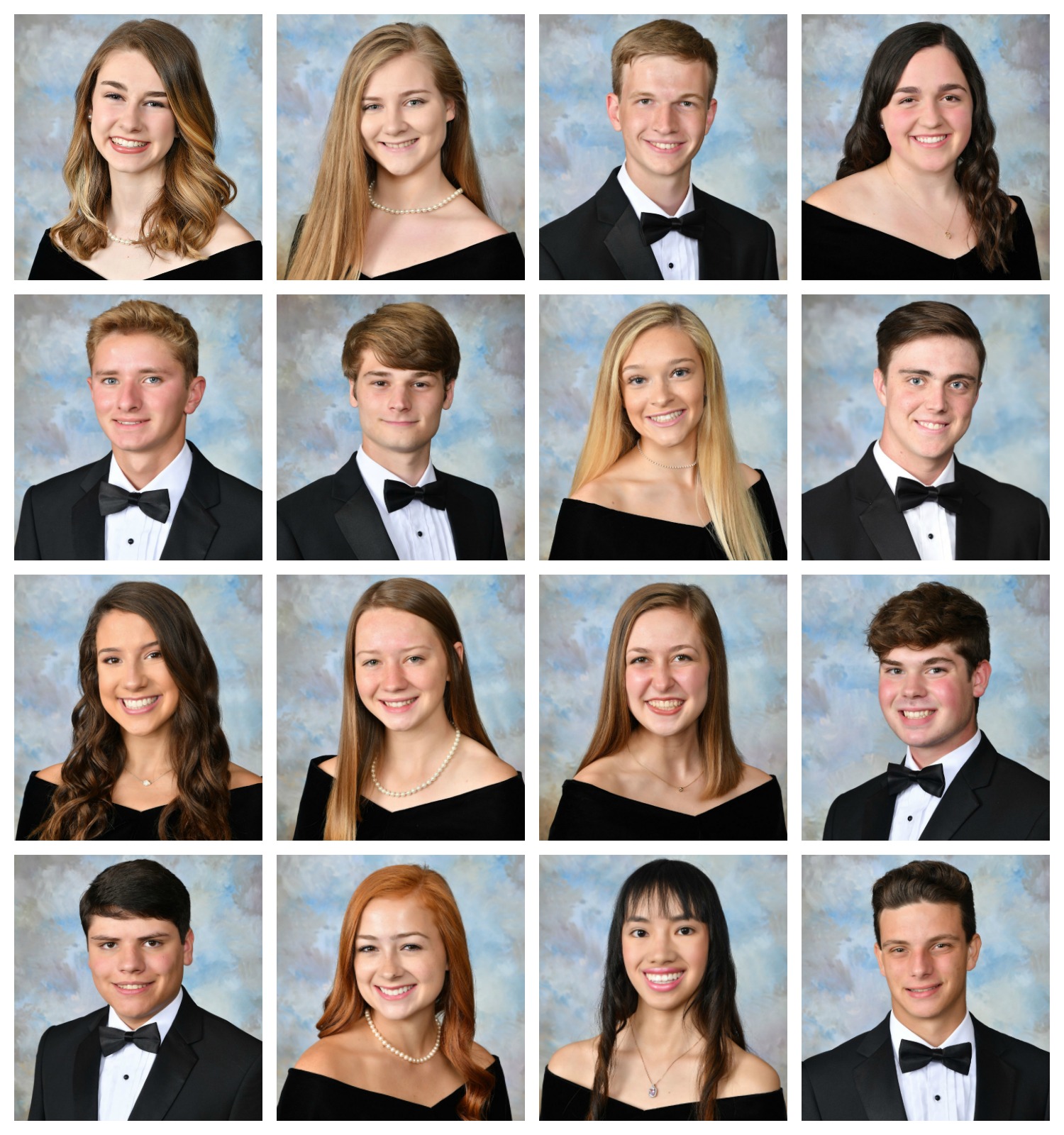 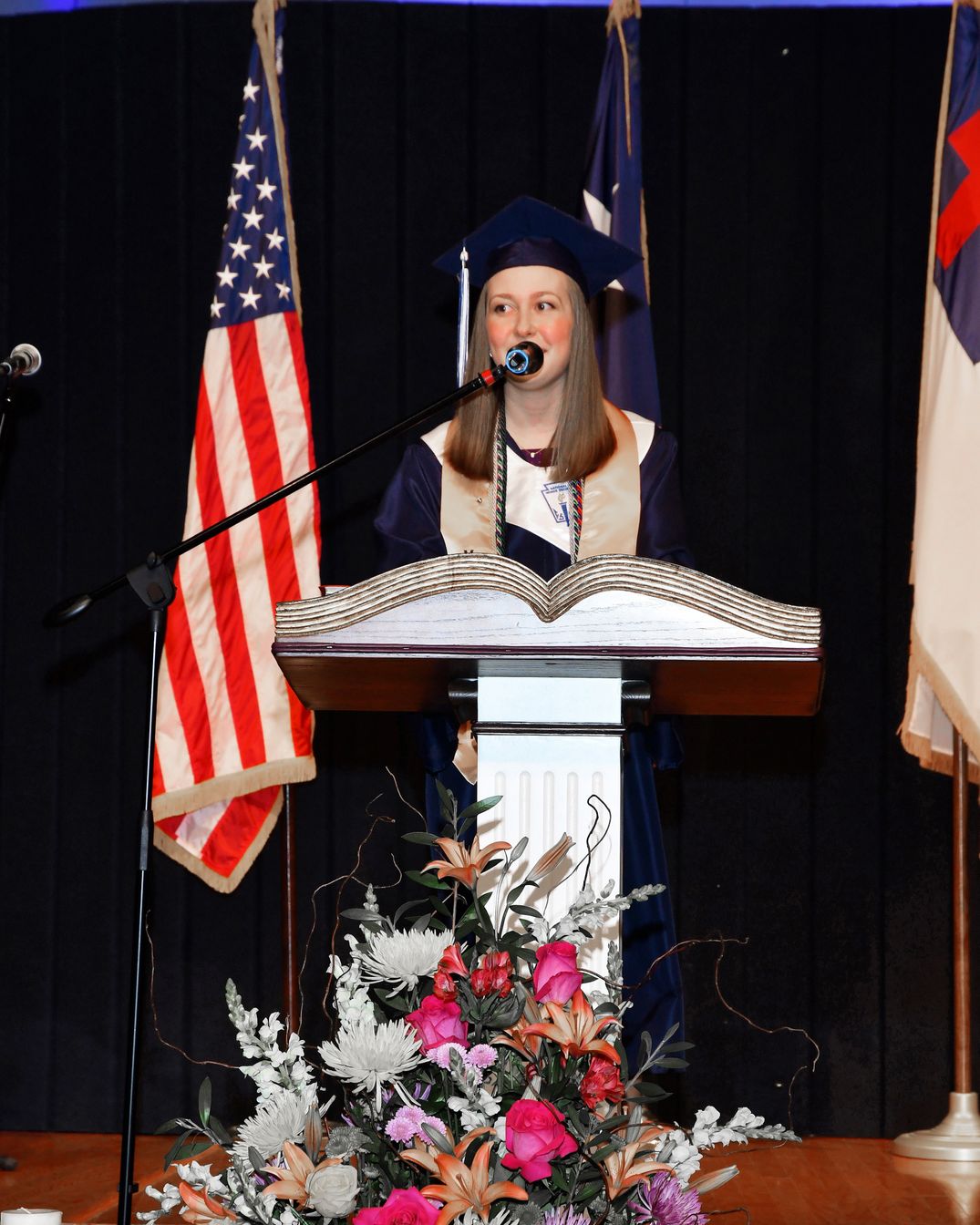 Valedictorian: Gabby Kostecki earned the distinguished honor of being named Valedictorian for achieving the highest grade point average in her class, and was awarded the Faculty Scholarship for Academic Excellence. Along with being named Valedictorian, Gabby was awarded the Texas Education Association’s Highest-Ranking Graduate Award. Gabby will attend The Honors College at the University of Houston as a Tier One Scholar. Gabby has received the following scholarships: Tier One Scholarship, Texas Highest Ranking Graduate, Society of Professional Women in Petroleum Award, Daughters of the American Revolution Good Citizen Award, Cy-Fair Women's Club Scholarship, Tomball Business and Professional Women Scholarship, Joshua Expeditions Outstanding NACS National Scholarship and the CCS Spirit of Paul scholarship (see below for more information). Her life verse is Matthew 11:28-29 - Come to Me, all you who are weary and burdened, and I will give you rest. Take My yoke upon you and learn from Me, for I am gentle and humble in heart, and you will find rest for your souls. 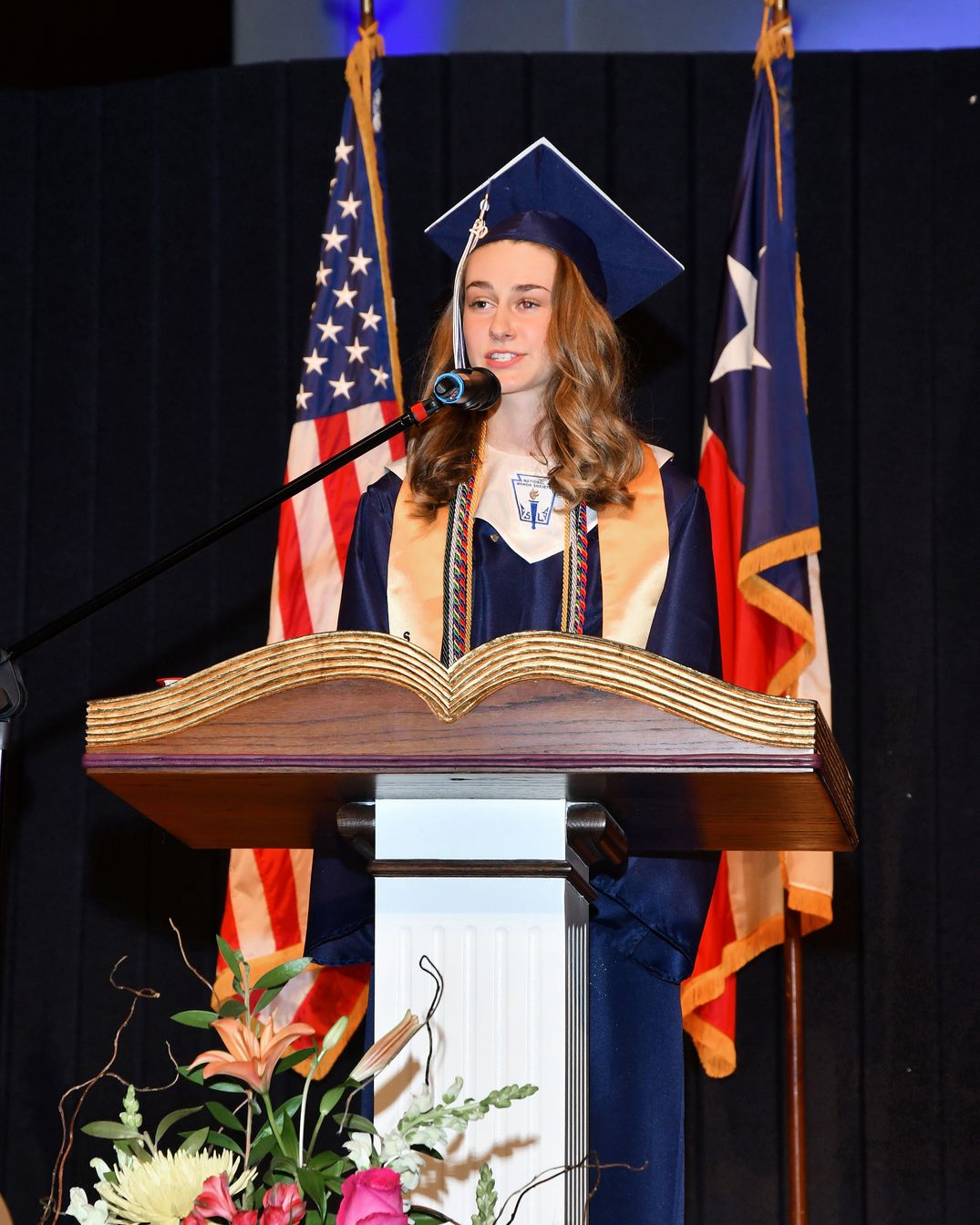 Salutatorian: Maddie Beckmeier earned the title of Salutatorian for achieving the second highest grade point average among her peers. Maddie will attend Baylor University as a Distinguished Scholar. Maddie has received the following scholarships: Baylor University Merit/Academic Scholarship, Invitation to Excellence Scholarship and the Baylor Virtual Events Scholarship. Her life verse is Romans 8:28 - And we know that for those who love God all things work together for good, for those who are called according to His purpose.

Will Rhodes Athletic Scholarship: In memory of former CCS student William David Rhodes, Abigail Davis and Clayton Dean were chosen to receive this athletic scholarship. These graduates have made public profession of their faith in Jesus Christ, demonstrated Christ-like behavior to fellow students and athletes and were living witnesses to others as they led their teams and followed their coaches. Abigail will attend Louisiana State University. Her life verse is 1 Thessalonians 5:11 - Therefore encourage one another and build one another up, just as you are doing. Clayton will attend the University of Louisiana - Lafayette. His life verse is Jeremiah 29:11 - For I know the plans I have for you, declares the Lord, plans for welfare and not for evil, to give you a future and a hope.

Andrew Gladney ('05) Memorial Heart of Gold Scholarship: In memory of alumnus Andrew Gladney ('05), Connor Newell was awarded this scholarship, which recognizes a senior who loves and accepts all, both inside and outside the CCS community; endears others without favoritism; participates wholeheartedly in activities to reflect Christian character and sportsmanship and diligently pursues and excels academically according to his/her ability. Connor will attend Texas A&M University. His life verse is John 1:4-5 - In Him was life, and the life was the light of men. The light shines in the darkness, and the darkness has not overcome it.

Fine Arts Scholarship: Cypress Christian School has a rich heritage of producing students who excel in the areas of music, art and drama. The Fine Arts Scholarship reflects an overall excellence in the arts. This year's recipients are Bella Kraft and Brandon Newell. Bella will attend the University of Mississippi. Her life verse is Psalm 18:34  - He trains my hands for battle; my arms can bend a bow of bronze. Brandon will attend Baylor University. His life verse is Colossians 3:14 - And above all these put on love, which binds everything together in perfect harmony.

Spirit of Paul Scholarship: Gabby Kostecki was awarded this scholarship for exhibiting the driving spirit and perseverance of the Apostle Paul who accomplished much for the early church. Gifts were received in memory of David Mayberry (grandfather of Collin, Cayden and Caroline Tate), Spyder Broussard (grandfather of Jackson Broussard), David Rhodes (father of Will and Josh Rhodes) and Jerry Van Beek (CCS co-founder) for this scholarship.

Linwood Brown Memorial Scholarship: This scholarship was established by an anonymous donor to honor the memory of longtime math teacher, Mr. Linwood Brown, who faithfully served hundreds of students throughout the course of his career teaching math in Christian schools. This award goes to a graduating senior who demonstrates a high level of interest in the areas of math and science and is noted for being a hard worker. Preference was given to a senior who was a student in one of Mr. Brown's classes. This year's recipient is Jace Harper. Jace will attend Lone Star College. His life verse is 1 John 4:19 - We love Him, because He first loved us.

Travis Chaffin Memorial Scholarship: In memory of former CCS student Travis Chaffin, J.T. Tackett was awarded a scholarship for being an encourager, leader, great athlete and friend as well as for his potential to make an impact on the world with his Christian walk. J.T. will attend New Mexico Junior College. His life verse is Philippians 4:13 – I can do all things through Him who strengthens me.