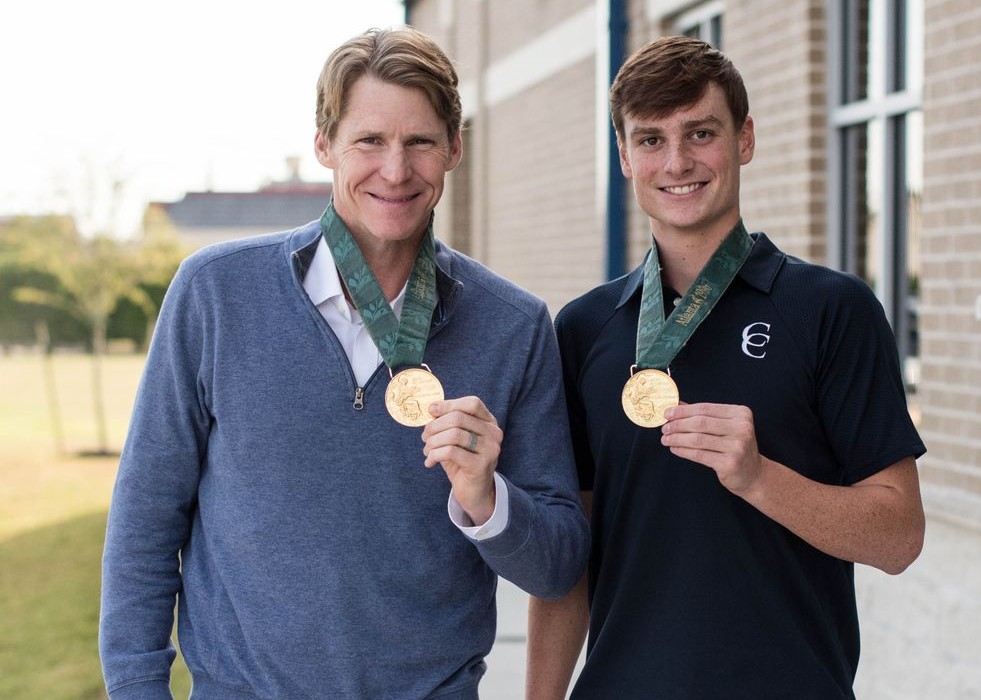 On Wednesday, November 6, Olympic gold medalist, Josh Davis, spoke to sixth through 12th-grade students in chapel. Josh asked the students to think about what story you and God are going to write for your life. He shared that he was athletic growing up, spending time taking ballet and gymnastics, playing soccer, basketball, baseball, tennis and even pole vaulting. It wasn't until he was 13 years old, that he began swimming. Josh had a goal as an eighth-grader to make the high school swim team, but a coach told him he would never make it as a swimmer. This did not deter him.

Josh shared with the students that this was where he decided to "Choose Positive." This attitude carried him all the way through to the Olympics. Through the years, he realized that his perspective needed to shift from believing that his academic and swimming performance determined his worth. He discovered that even gold medals would not fill his heart. A relationship with Jesus is the only thing that would do that.

Everyone will have obstacles in life and we must decide how we will react to those obstacles. Our feelings and thoughts will betray us, but we can focus on Philippians 4:8 -  Whatever is true, whatever is noble, whatever is right, whatever is pure, whatever is lovely, whatever is admirable—if anything is excellent or praiseworthy—think about such things.

Josh encouraged the students to focus on three things:

Never get over how much God loves you and the story He wants to write for your life.

A highlight of the day was having senior, Elliott Jones, who will be swimming for the Auburn University Tigers in the fall and who has qualified for the Olympic Trials (Omaha, Nebraska - June 2020) in the 200-meter backstroke, meet and speak with Josh.

- Made possible by the Owen family and their friends, the Nath family, longtime friends of Josh Davis.

Despite a late start into the sport of swimming, Josh Davis made history by becoming the only man to win three gold medals at the 1996 Atlanta Centennial Olympic Games. Four years later as Captain of the 2000 Sydney Olympic Team, Josh broke the American Record 3 times in his signature event the 200m freestyle.  For 22 years now, Josh has led a nationwide tour of Olympic swimmers called the BREAKout! Swim Clinic Tour. He speaks to teams all over the country on how perseverance, pursuing excellence and attitude can turn the ordinary into extraordinary.

Still practicing what he preaches, Josh just recently became the fastest man ever over 40 years old as he set national records in the 50, 100, 200 and 500 Freestyle. Josh Davis lives in Edmond, OK with his wife and 6 growing kids.